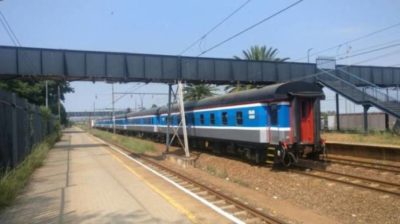 BY SILAS NKALA
The National Railways of Zimbabwe (NRZ) has temporarily suspended commuter train services in Bulawayo due to a decline in passengers.

This was confirmed by the parastatal’s spokesperson Nyasha Maravanyika yesterday.

“NRZ is temporarily suspending the commuter train service considering that most companies are going on shut down and schools are also closing during that festive period.

“This will result in reduced demand for the commuter train service,” he said.

“The NRZ commuter trains have carried a total of 50 157 passengers since November 2 2020 when the service resumed after a seven-month stoppage due to COVID-19 restrictions.

“Most of the train services were the City-Cowdray Park route which carried 39 730 passengers. On the City-Mganwini route, a total of 10 427 passengers used the service.”

Maravanyika said passenger figures on the City-Mganwini route were gradually picking up after a poor start which saw a few people using the service in the first weeks.

“NRZ would like to thank members of the public for their patronage since the re-introduction of the commuter train service in Bulawayo on November 2 and their co-operation with NRZ staff in ensuring that COVID-19 guidelines were adhered to,” he said.