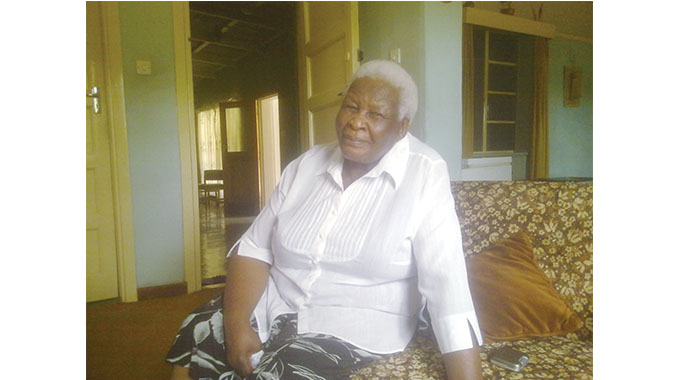 Robin Muchetu, Senior Reporter
EKUPHUMULENI Geriatric Nursing Home in Bulawayo is home to the aged, with a capacity of 62 inmates but is home to 47 including Gogo Polyanna Mahlangu, who founded the facility.

Gogo Mahlangu (95), suffered a stroke and has been taken in for the past two years so that she receives the much-needed palliative care owing to her health conditions.

The stroke has impaired her ability to talk and old age has not spared her either as she cannot walk. She is pushed on a wheelchair and spends some days inspecting the home she co-founded when she was still fit.

Ekuphumuleni Geriatric Nursing Home administrator Ms Sukoluhle Hove said they had taken Gogo Mahlangu in as she recuperates but tells of a sad story where the matriarch is scared to go back home, in Luveve 4, a medium density suburb after a break in occurred two years ago.

“She had a stroke a while ago and unfortunately one night when she was home in Luveve sleeping, thieves broke into her home and she was beaten up by the ruthless criminals. So, after the incident she refused to continue living in that house, she didn’t feel safe anymore so we took her in with the assistance of some of her family members,” said Ms Hove.

At her home near Luveve Clinic she was staying with relatives, a nurse aide, domestic worker, driver, gardener and a night watchman when tragedy struck. The robbers gained access to the house after attacking the guard.

“The robbers thoroughly beat up the night watchman and tied his hands and feet and they broke a kitchen window to gain entry into the house. They then axed the door that gives access to the rest of the house as it was locked. They further axed her bedroom door and that is where they attacked her,” said Ms Hove.

The robbers are said to have attacked Gogo Mahlangu demanding that she surrender foreign currency that they suspected was in her home.

“They beat the nurse aide, the domestic worker and Gogo Mhlangu demanding that she gives them United States dollars but she had no money. They then ransacked the house but could not find anything and eventually left. This incident traumatised her so much that she refused to continue staying at her home and we took her in,” she said.

The robbers then got away with a few bags of rice, flour and other grocery items.

Following the incident Gogo Mahlangu has been witnessing sunrises and sunsets at a home she initially founded 34 years ago to house aged patients that had been discharged from health institutions but not fully recovered.

“The home has a staff complement of 45 all under the Ministry of Health and Child Care and are assisted by well-wishers. We receive food parcels from well-wishers for the patients, these well-wishers committed themselves to assisting the home and we are very grateful for this gesture. We also have well-wishers who are feeding the workers too so the situation is manageable for us,” said Ms Hove.

However, the home is facing operational costs.

“Our needs are focused on expenses that we meet on running the home, for example, electricity is a challenge for us now. We had been using a big electric cooker, but our Zesa bill skyrocketed and we decided to move to gas then. We acquired a 48kg gas cylinder and a six-plate gas cooker and when we got it, it was costing $25 to fill it up, but that has gone up to $6 000 and we cannot afford that anymore. We use 60kg of gas each month,” she said.

The administrator said they have to switch to alternative sources of energy to cut costs.

“We are now looking at using biogas to cook which will work out cheaper for us. We are trying to bring people together and have this project running. Our borehole is not functioning well, water that is there is not as adequate as it used to be before and when the Bulawayo City Council cuts supplies, we have challenges. We are kindly asking for donations of a borehole, we need a new one drilled for us. We have a garden and we usually get income from produce from the garden but at the moment we have reduced production.”

The home acquired a farm along Airport Road, it if becomes operational it can also help in generating income. However, there is no water and accommodation facilities for the workers.

“We look forward to getting things started there with the help of well-wishers. Covid-19 has not spared anyone in the country and donors are probably facing challenges due to this coupled with various economic challenges,” she added.

Ms Hove said the concepts of homes for the aged must be embraced, as it is not abandoning your relatives but an opportunity to give undisturbed care.

“We do get that a lot, people asking how one dumps their parents at a home. But these things are slowly changing where a lot of young families are migrating and the elderly are brought here as there will be no one to care for them. Also, Zimbabwean people in the Diaspora understand the concept of care/nursing homes as it is common in other countries, so more and more people are warming up to the idea and people are coming in now. This has seen demand starting to increase,” she added.

She lamented that in some cases the elderly were being neglected. As for Gogo Mahlangu, she has no relatives in Bulawayo save for a few that are in the Diaspora and Harare.

“She does have some few cousins we have heard of locally, but her real family is out of the country and could not take her in readily such that she came to Ekuphumuleni,” said Ms Hove.

Ms Hove said the home is accepting any form of aid that they can get, be it food, pieces of furniture, clothes or even reading material.
@NyembeziMu