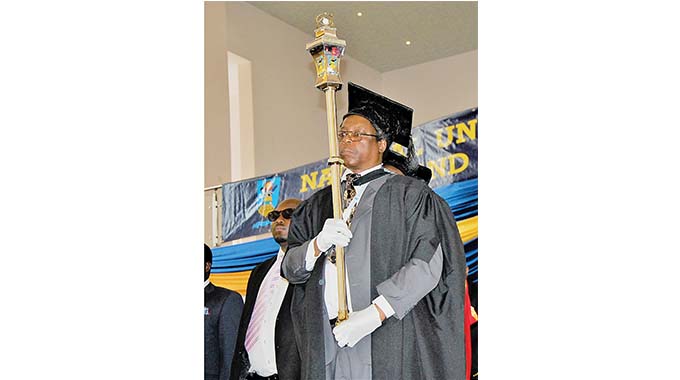 Prof Dube, who joined the institution in 1989, served the university in various capacities, starting off as a lecturer then becoming an associate professor in 2010. He later attained full professorship in 2018. Prof Dube was also appointed to coordinate teaching Applied Biology and Biochemistry in 1992 and went on to be at the helm of the department for six months in 1994. He was appointed the senior lecturer in 2005 and was a member of the Nust council between 1992 and 1996. He was also the chairperson of the Campus Health and Safety Sub-committee.

In a speech delivered during the burial, Nust registrar Mr Biggie Ngwenya described the fallen scholar as a vital cog at Nust.

“He dedicated 29 years of service to Nust, as one of the founding members after joining the university at its inception in 1991. Prof Dube was the face of the Nust graduation ceremony since 2005 – for 15 years to be precise. When the graduation fanfare began, the mace and Prof Dube leading the chancellor’s procession were the first to appear before a sea of graduates waiting to be capped. If the mace did not appear, then the ceremony would not be constituted,” Mr Ngwenya said.

Mr Ngwenya waxed lyrical about Prof Dube’s achievements, narrating how Prof Dube had found a home at the institution.

“The Nust community and the Department of Applied Biology and Biochemistry which had become his second home are poorer today following the passing on of Prof Dube. He was an avid scholar, specialising in Zoology and was particularly passionate about the subject of water borne parasites of mammals, and had a special interest in traditional African foods. He is a graduate of the University of Benin in Nigeria where he attained a Bachelor of Science Honours in Zoology and Master of Science in Zoology in parasitology from 1976 to 1982. He also studied for Grad CE at the University of Zimbabwe from 1985 to 1986,” Mr Ngwenya said.

In addition to his education and vast knowledge, Mr Ngwenya praised Prof Dube on his level of intellect.

“In Prof Dube, Nust found a leader. No wonder when he retired in December 2018, he was retained on a post-retirement contract for the university to continue tapping from his fountain of knowledge until his time of death,” he said.

Prof Dube was born on 8 August 1953 in Gwanda District in Matabeleland South and did his primary education at Buvuma before proceeding to Manama Mission for his secondary education. The eighth of 10 siblings, Prof Dube is survived by his wife, Cinderella and three children, Rorisang, Tsepo and Pearl.