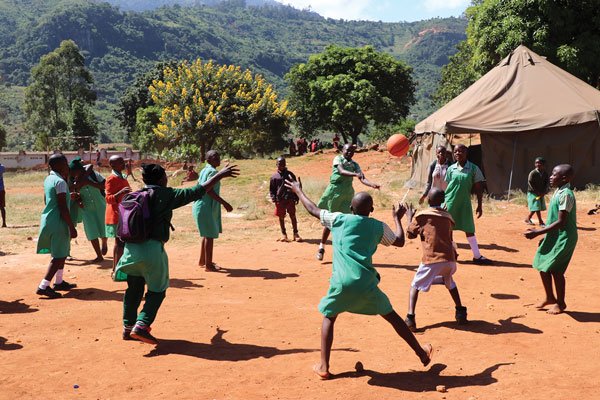 More than 15 000 children in Kariba rural and Binga districts are benefitting from a nutrition and food security programme facilitated by the Zimbabwe Red Cross Society (ZRCS) in the drought prone areas.

The Danish Red Cross-funded project is targeting primary school pupils in selected wards of Kariba and Binga where beneficiaries are getting one hot meal of sadza and beans daily.

ZRCS provides the cooking oil and beans, while government through the Social Welfare department provides the grain.

Secretary-general for the humanitarian organisation Maxwell Phiri said they were doing all they can to improve child nutrition and help keep children in school.

“We are grateful for the support from Danish Red Cross, which has helped us provide a balanced meal to school going children,” Phiri said.

“What this means is that beyond nutrition and food security, we are also breaking the poverty cycle through empowering families through education as students can concentrate and get good grades.”

Phiri’s sentiments were also echoed by various stakeholders, among them school heads and government officials.

Speaking to Standard Style, Ward 8 nutritionist Tarisai Mururi said the project had brought a lot of positives given the good insecurity in the area.

“As a result, we record low yields and most of the children become mildly or severely malnourished having been born to malnourished mothers.”

Mururi, who bemoaned stunting and compromised brain development because of malnutrition, thanked the Red Cross for ensuring enhanced child nutrition and food security in the area.

“The severe drought has resulted in stunting among children while brain development has been greatly compromised,” she said.

“The support from the Red Cross has, therefore, gone a long way in enhancing child nutrition as students are given one good hot meal every day.”

Chikuro Primary School head Tavengwa Mupatapanja said his school was now recording many positives as a result of the programme.

“Because of drought, we were observing poor concentration among students as most of them would come to school on empty stomachs,” Mupatapanja said.

“There was also high levels of absenteeism and drop-outs as students helped their parents to look for food.”

The school, which is in Kariba rural ward 7, has also recorded improved enrollment, thanks to the child nutrition and food security programme.

The same trend is evident at neighbouring schools like Sawiramakwande and Mutengu primary schools.

The post Nutritional lifeline for Kariba, Binga children appeared first on The Standard.