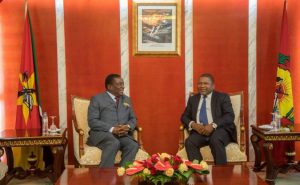 Source: Nyusi and Mnangagwa hold talks in Maputo | The Zimbabwean

Mozambican President Filipe Nyusi stressed in Maputo on Wednesday the willingness of the Mozambican government to work with Zimbabwe, to transform the resources of the two countries into actions that will guarantee sustainable growth.

He was speaking during the first working visit to Mozambique by the new Zimbabwean President Emmerson Mnangagwa. The latter is in a tour of countries of the Southern African Development Community (SADC), which has already taken him to South Africa, Angola and Namibia.

Nyusi said that the inclusion of Mozambique on the list of countries to be visited during this tour bears witness to the importance of the political and diplomatic relations between Mozambique and Zimbabwe.

He said that the two countries have inherited a common past and are now renewing their commitment to work together for the progress of their peoples. He recalled Mozambique’s key role in the struggle to liberate Zimbabwe from the racist regime of Ian Smith, providing rear bases for the fighters of the Zimbabwean liberation movements in the 1970s.

Bilateral cooperation, Nyusi said, was formalised in the very year of Zimbabwean independence, 1980, with the signing of a general agreement on scientific, economic, technical and cultural cooperation, followed up by the formation of a Mozambique-Zimbabwe Joint Cooperation Commission.

“We want our commercial relations to develop and to rise to the same level of excellence as our political and diplomatic relations”, said Nyusi. “To this end, the Mozambican government has been making investments to improve the quality of the infrastructures and services of our ports, railways and roads”.

As a landlocked country, Zimbabwe is dependent on the Mozambican ports, and the roads and railways to Maputo and Beira.

Nyusi also stressed Mozambique’s potential as an exporter of electricity. He said Mozambique wants to be a reliable supplier of good quality electrical power to Zimbabwe.

There is already a transmission line from the Cahora Bassa dam on the Zambezi to Zimbabwe. Currently Zimbabwe is buying 50 megawatts of power from Cahora Bassa, an amount that could be increased depending on Zimbabwe’s capacity to pay. In the past, the Zimbabwean electricity company, ZESA, has run up large debts to HCB, the company that operates Cahora Bassa, but an HCB source told AIM that ZESA cleared its debt in August.

Nyusi believed that the Mozambican and Zimbabwean economies should be complementary, and encouraged the private business sector in both countries to be “more pro-active” in exploiting opportunities “thus contributing to the effective and sustainable growth of our economies”.

The two countries, he continued, should be “more daring” in creating “partnerships for development”. Sustainable exploitation of their resources – including arable land, water, minerals and an extensive transport network – could generate positive changes in their economies, with mutual benefits.

For his part, Mnangagwa promised that the Zimbabwean presidential, parliamentary and local elections scheduled for later this year will be held “in accordance with the pillars and principles of democracy”.

He told Nyusi he is determined to ensure free, fair and credible elections that would be “free from disputes and allow the country to enter the world panorama as a democratic state”. 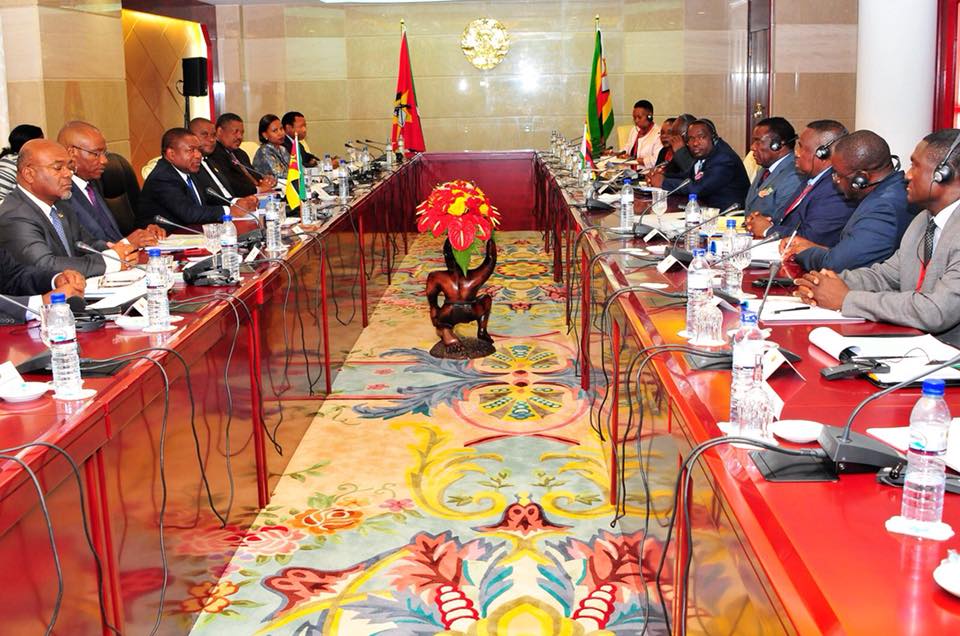 Picture: Presidency of the Republic

Mnangagwa took office on 24 November, after the Zimbabwean military removed his predecessor, 94 year old Robert Mugabe, in a bloodless coup. He insisted that there has been “a peaceful transition” and that respect will continue to be shown to Mugabe.

Evidence of this, he said, is the adoption of Mugabe’s birthday (21 February) as a national holiday, a measure intended to preserve Mugabe’s legacy as a leader of the Zimbabwean liberation struggle.

After his talks with Nyusi, Mnangagwa met with the Zimbabwean community resident in Maputo.