Of Harare’s public toilets and queues 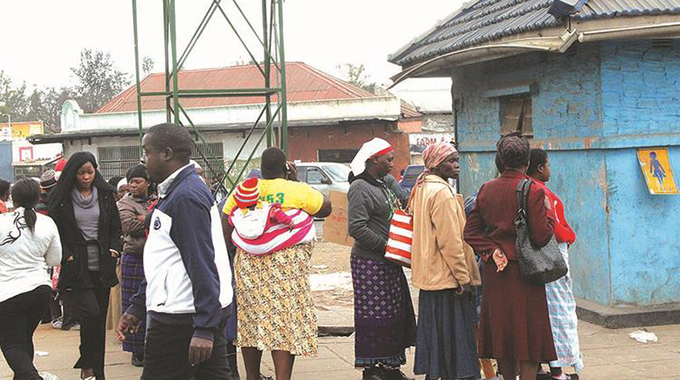 Given that Harare is burdened with various illegal activities that include selling of cooked foods on the streets and roasting of maize on streets, it is important to have adequate water sanitation facilities in the city centre.

People in the queue are neither waiting for transport nor intending to buy anything, but look forward to their chance to use the only free public toilet at the busy bus terminus, which thousands of commuters use daily.

In the queue are women, of all ages.

A woman who identifies herself as Mai Maruta is 56-years-old and has been in the queue for 15 minutes.

“I have health issues, fibroids, and they put a lot of pressure on my bladder,” she says. “As a result, I use the toilet frequently. It is hard when I come into town where I have to queue just to use a toilet. I cannot afford money for a pay toilet.”

Another woman is in the queue.

Her name is Martha and is a vendor who sells tomatoes, green leafy vegetables and carrots.

She has left her wares under the watch of fellow vendors on a pavement stretching between Park and Chinhoi streets.

As the queue moves at a snail’s pace, she can no longer hold on.

Her face tells the struggle going on in her body as she tries to control nature.

The nearest toilet is a pay facility just under the footbridge near Town House, but she does not know where to find the next free toilet.

“I have no money for the pay toilet,” she says. “I will wait for my turn. We queue every day.”

Martha patiently hangs on for a few more minutes.

When her turn finally arrives, she bolts into the toilet almost running over another woman who is exiting.

There is inaudible exchange of words by the two women.

In an alley at Market Square bus terminus, a man is almost “stuck” to the wall as he relieves himself while at the same time try to maintain some privacy.

He is also a vendor and when he is done, goes back to selling his roasted fresh maize.

His hands have not been washed, but he goes straight to using his hands to handle maize cobs he is selling to the next customers – commuters who need a quick snack on their way home.

“The toilets are usually dirty so I avoid them,” he says. “Too many people use them and I cannot stand the strong stench.”

The above incidents show the shortage of public toilets in Harare’s CBD which has affected people going about their businesses daily.

What has made the situation worse is the increase in the volumes of people coming into the CBD over the years, something council officials seem not to put at the top of their priority list.

Moreover, a lot of people spend more time at the bus terminuses as they wait for Zupco buses, which are cheaper, but few, compared to what is being charged by kombis.

To make the situation worse, the toilets close early, at 7pm, while commuters are still trickling to the bus terminuses.

Toilets are a public health concern as their unavailability or inaccessibility leads to open defecation and urination, failure to wash hands and ultimately, spread of disease.

Harare has five pay toilets in the whole of the CBD, and at least 21 free toilets which seem not enough as queues have become the order of day, especially for the women’s section.

The free toilets are also old and sometimes dirty that it is difficult to use them.

Acting City of Harare spokesperson Mr Innocent Ruwende said the local authority cannot cope with the human traffic in the central business district when it comes to the provision of toilets.

“The city is looking at extending operating times for the public toilets to try and cope with the demand. We are set to construct more toilets as part of the city beautification programme,” he reveals without giving exact numbers of toilets that will be constructed.

According to Mr Ruwende, the city is also engaging private partners to refurbish the existing toilets, for example the one at Market Square, Simon Muzenda Street (former Fourth Street) and the one in Bute Street, which is also quite notorious for long queues.

He said to a lesser extent, open defection in the city’s alleys is mainly practised by those who do illegal activities in town.

“For example, dealers at Ximex Mall and illegal vendors trade on pavements where there are no toilets because the areas are not zoned for vending,” he said. “Street kids even urinate behind toilets where they are available.”

Mr Ruwende said there was need to change the thinking of people.

“It is also a question of the mindset of our residents towards cleanliness,” he said. “We need to change our mindsets if Harare is to restore its former glory as the Sunshine City. It requires a collective approach.”

Given that Harare is burdened with various illegal activities that include selling of cooked foods on the streets and roasting of maize on streets, it is important to have adequate water sanitation facilities in the city centre.