Of mutilation of scriptures 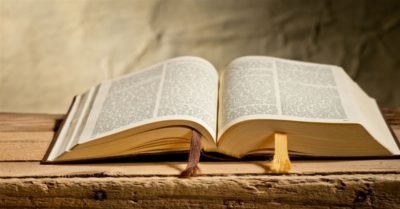 THERE are “preachers” who are not intentionally heretics but their ignorance results in heresy. They’re innocently wrong and going down the drain with their gullible followers.

Talking of the blind leading the blind according to scriptural description. In many instances, it’s because of suffocating indoctrination they received. You would quickly remember that before his conversion, Saul thought that he was right and doing God favour when he was persecuting the church.

He later remorsefully recounted in 1Timothy 1:13, Amplified, “Though I formerly blasphemed and persecuted and was shamefully and outrageously and aggressively insulting [to Him], nevertheless, I obtained mercy because I had acted out of ignorance in unbelief.” Ignorance and unbelief. There are many who are caged in this.

Another group is made up of those who knowingly mislead in order to fleece naive followers who are lazy to read and study the Bible. In this group are also agents of the devil whose mission is to steal, kill and destroy. Previously we ended up discussing how mutilated is Philippians 1:6, “Being confident of this very thing, that he which hath begun a good work in you will perform it until the day of Jesus Christ:” We shall presently study it.

What’s this good work? Remember our rule; pretext, text and post text and the general flow of the book and the Bible as a whole. This work is not building a house, completing a course or such material progress. The pretext is Philippians 1:5, “For your fellowship in the gospel from the first day until now;” As you can see, this is about the Gospel.

According to Pauline teaching, it’s unmeritted, unearned, undeserved and humanly unattainable favour. It’s not human works or do’s and don’ts but Grace, Glad Tidings or Good News. It speaks to the relationship between Aba Father and His family, a spiritual reality.

The good work begun is salvation by Grace through faith. In other words being born again after receiving the Gospel of Christ and confessing Jesus as Lord and Saviour.

The confidence comes from the reality that He who began the good work will complete it. The word perform in verse 6 means complete. The salvation is guaranteed by the One who began it. It won’t be lost. If it’s self righteousness, it’s not of God.

His righteousness is assured to the coming of Christ. So if you are saved by Grace through faith, be confident, you won’t lose it and end up in hell.

One may ask, so which Scriptures can we use for completion of houses or projects? There are many. Search them. Don’t misapply. For expediency, let’s look at Zechariah 4:8-9, “[8] Moreover the word of the Lord came unto me, saying, [9] The hands of Zerubbabel have laid the foundation of this house; his hands shall also finish it; and thou shalt know that the Lord of hosts hath sent me unto you.” This directly points to material things, your building project if you wish. However please note that the house was referring to the temple.

Let’s do a short exegesis. We shall look for the word mind. For those on the deeper end, please go to the original language, Greek. However I want to be simple but correct for the benefit of everyone so will stick to English. In its simplest form the mind of Christ is the born again spirit. It’s not for physics, geometry, chemistry, math, etc.

Philippians 2:5 records, “Let this mind be in you, which was also in Christ Jesus:” As you can see by punctuation marks, the sentence doesn’t end in verse 5. It continues in Philippians 2:6-8, “[6] Who, being in the form of God, thought it not robbery to be equal with God: [7] But made himself of no reputation, and took upon him the form of a servant, and was made in the likeness of men: [8] And being found in fashion as a man, he humbled himself, and became obedient unto death, even the death of the cross.” The quantum of it all here is humility.

The pretext lends credence as written in Philippians 2:3-4, “[3] Let nothing be done through strife or vainglory; but in lowliness of mind let each esteem other better than themselves.

[4] Look not every man on his own things, but every man also on the things of others.” The whole issue is about humility. It’s of spiritual essence moreso of a regenerated spirit. Next time please don’t just shout, I receive Papa. Go with your brain to church.

Now unto him that is able to keep you from falling, and to present you faultless before the presence of his glory with exceeding joy, To the only wise God our Saviour, be glory and majesty, dominion and power, both now and ever. Amen. Grace and peace be multiplied to you through knowledge.