On a wing and a prayer: Mnangagwa turns to God as crises mount

Source: On a wing and a prayer: Mnangagwa turns to God as crises mount | Newsday (News)

Faced with a health crisis and an imploding economy, President Emmerson Mnangagwa on Thursday declared June 15 as the presidential national day of prayer in the hope that this could help stem the rising COVID-19 cases. 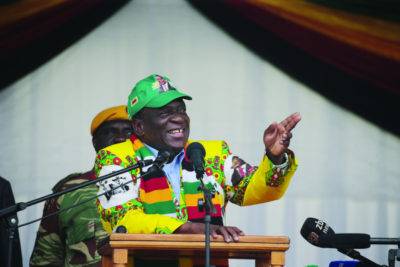 “As your President, during this difficult season in which our nation and indeed the world face the challenge of the COVID-19 pandemic, I am humbled to invite you all in the name of our Lord Jesus Christ to take time in prayer and fasting as a nation before the Almighty God, to seek his mercy, wisdom, help and healing to overcome this deadly pandemic,” he said.

Mnangagwa was expected to provide an update of what steps Zimbabwe will take following his announcement of an indefinite lockdown.

The President had said he would provide fortnightly updates, but almost four weeks later, there has been no such update, instead Zimbabweans would have to be content with seeking divine intervention.

Mnangagwa said there will be a church service broadcast live between 10am to 12pm and people were free to engage in small groups as families and churches in prayer.

“In doing so, we however, diligently continue to observe every precaution necessary to prevent the spread of the Coronavirus,” he said before opening scriptures in the book of Second Chronicles.

Mnangagwa joins a motley crew of leaders who have turned to the heavens.

One such leader is his Tanzanian counterpart, President John Magufuli who seems impervious to science and is strongly advocating for his citizens to throng churches and mosques.

Former Harare mayor Bernard Manyenyeni said he will not take part in Mnangagwa’s prayer session, accusing him and his party of causing untold suffering to millions of Zimbabweans.

“As a citizen, I will not participate in the National Day of Prayer which the President has called for,” Manyenyeni said.

The post On a wing and a prayer: Mnangagwa turns to God as crises mount appeared first on NewsDay Zimbabwe.