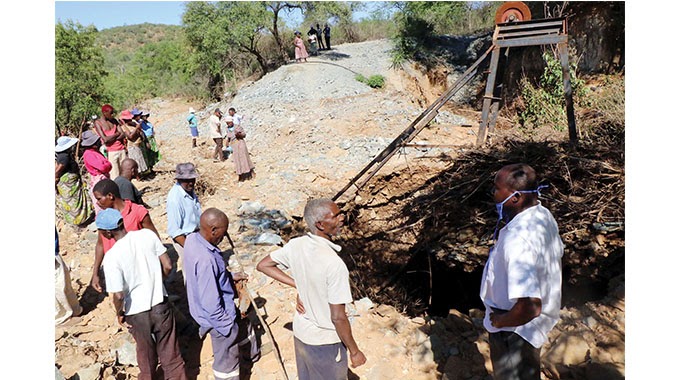 Bruce Ndlovu, Sunday News Reporter
THE families of six illegal miners, including four from one family, that were trapped underground when a mine collapsed in Matshetshe, Esigodini, will conduct a burial ritual at the site, as authorities have decided it would be too dangerous and costly to attempt any effort to retrieve the bodies.

Nkosilathi Ndlovu (29), Christopher Dube (23), Ndumiso Dube (19) and Blessed Ncube (24), all members of one family, were trapped alongside Nduduzo Ntini (28) and another miner only identified as Mlilo when a flash flood triggered a collapse on their illegal mining claim on 10 November.

Families of the six have seen hopes of a rescue dashed when a rescue effort was abandoned 11 days after the tragic disaster as the mine was flooded, making it too risky to proceed with the operation.

Hopes of a retrieval have also since faded, with Chief Government Mining Engineer, Engineer Michael Munodawafa noting as part of his observations after a study of the area that it was too dangerous to attempt any rescue operation.

“The debris caught up within the shaft 1 headgear (more than 1m height) suggest the shafts were at one time entirely flooded and thus it can be deduced that water inundation underground and depreciation of oxygen occurred.

“The area is unsafe to conduct any rescue operation as it is characterised with friable ground, loose rock material and debris posing danger for further collapse. A visit on the seventh day showed some further collapse on both sides of the trench and inside the radius of the shaft,” he said.

Eng Munodawafa noted that if an effort to retrieve the bodies was initiated, it would take over a year of continuous work before any fruitful results were realised. Furthermore, indications are that the mine, forfeited by its previous owner in 2013, was operating illegally.

“Some debris surrounding the shafts was washed into the two shafts filling them up. Going by the assumed shaft depth of 60m, any excavation to the mine bottom would entail opening up more than 100m diameter pit from surface, excavating 160 000 cubic metres (450 000t) of rock and more than one year and two months of continuous work. The excavated material should be dumped out of the dam reservation area.

The said Patridge NWC mine registration number 35541 was forfeited on 15 May 2013 and is located at the site where the accident occurred approximately 1,5km north west and there is no way a mine claim could have been registered across the river and within a dam reservation thus the deduction that any mining was illegal,” he said.

As part of his recommendations, he exhorted that the families be allowed to carry out burial rituals at the site.

Eng Munodawafa recommended that no further action be taken with the families of the deceased encouraged to conduct their burial rituals at the site. In addition, he recommended that the alleged owner of the mine, Ms Sakhile Ndlovu, be prosecuted for operating illegally and for her actions in the aftermath of the mine collapse.

When Sunday News visited the site of the collapse last month, villagers expressed outrage at Ms Ndlovu, who they said had delayed rescue efforts by denying ownership of the claim while she hastily pulled down evidence of any mining activity.

“The area of the accident to be back filled so that there is no further access by illegal panners in the future. Relatives of the deceased (need) to be allowed access to the scene of the accident for the purpose of seeing the place and doing rituals before or after backfilling. The purported owner Sakhile Ndlovu needs to be prosecuted for carrying out illegal mining, tampering with the scene of the accident prior to the investigation and negligence which resulted in the death of the six miners,” he said.

Speaking to Sunday News, a distraught Ms Moddy Ndlovu, who lost a son and three grandchildren in the accident, said the family was yet to conduct any burial rituals despite the fact that they had access to the site.

“Nothing has happened since that time when we went to try and initiate some kind of rescue mission for the boys stuck down there. The last time we were told that there would not be any attempt to dig them up because the place is dangerous and there might be more accidents if they tried to do any work there. So we were told the collapsed mine would serve as their place of burial.

“…We have not done any rituals to bid farewell to them. We are just moving on and it is painful. We are allowed to go to the site but there is no further communication with any authority and I think that’s the end of it,” she said.