Our obligation to the nation, indeed the world 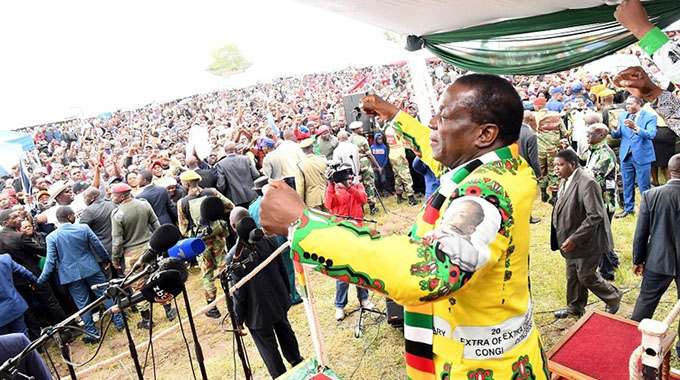 Source: Our obligation to the nation, indeed the world | Herald (Opinion)

Emmerson Mnangagwa President of  Zimbabwe
AS we inch nearer and nearer the Harmonized National Elections which will fall due in a few months’ time, our National People’s Party, the Zimbabwe African National Union–Patriotic Front, Zanu-PF, is gradually, but inexorably putting all its ducks in a row for this plebiscite which it is set to win resoundingly.

This programme of readying our Party for the Elections started, quite naturally, with many meetings and many internal processes held across the country, culminating in our Party Primary Elections which were held in the past two days.

What set these Party Primary Elections apart from those we have had in the past, is the fact that these have been conducted under the auspices of a newly-created arm of our Party, the Party Elections Commission, which we commissioned recently in order to professionalise our candidate selection process, so we deepen our Party’s internal democratic traditions.

Whatever teething problems we have experienced so far — and we have noted them closely — we remain convinced that the democratic course we have started in the management of our Party affairs is the correct one, indeed one befitting a Party of our history, our strength and our stature.

Whatever these initial challenges, it must never be lost to us that we are the Party of National Liberation which is governing National Affairs.

This means our responsibilities in shaping and reshaping the National Body Politic, as well as the National Democratic and Electoral Ethos, can never be shirked or overstated.

As the ruling Party, the democratic content and standards of our processes define and pre-ordain our National Politics. We thus must not fear to widen the scope and play of the elective ethic in our Party affairs and processes. Whatever challenges we face in the interim must thus be in the direction of firmly rooting the democratic ethos which, after all, we planted in the land through our historical sacrifices as a Party of National Liberation. Far more poignant than the teething problems we have encountered in this internal selection project is the overwhelming turnout of our people who have registered their enthusiasm and keenness to participate in this process which, after all, they see as guaranteeing their successful election in the forthcoming plebiscite. Throughout the country, the strength of our Party has been on show in these past two days. Equally, our capacity to compete against one another in a non-antagonistic, comradely way has been demonstrated. We have thus sown the seed of internal Party democracy; we have thus successfully tested our cohesion as members of the same political family. And because of both, we have sent clear signals to those who have chosen to pit themselves against the sheer might of our Party.

Before long, we shall be launching our Manifesto, thus marking the commencement of our campaign programme which must be conducted in an environment of continued unity and total peace, so we secure a result which is free, fair and uncontested. As ZANU-PF, this is our obligation to our Nation, indeed our pledge to the rest of the world.