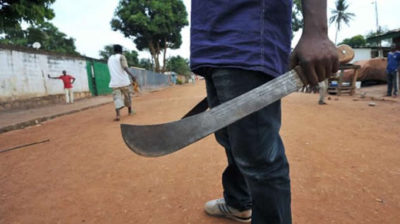 CHAIRPERSON of the Parliamentary Portfolio Committee on Mines, Edmond Mkaratigwa has defended the recent deployment of security forces on rowdy machete gangs which he described as “vampires” disturbing orderly mining activities in the country.

Mkaratigwa’s remarks came amid reports that the machete gangs had resurfaced in the country’s gold-rich areas after they were flushed out by security forces early this year.

“The committee noted during the initial hearing on the matter of its gold inquiry that these machete gangs had the propensity to resurface,” Mkaratigwa said.

“Information gathered had been indicating that they had migrated to a neighbouring country after the crackdown by the security forces before the COVID-19 lockdown.

“These are like vampires, once they have tasted blood they will really fight back to suck again and they need an organised and joint security force that drives them off stage and also, they need to be starved off what makes them thrive.”

The machete gangs had caused havoc in different mining areas in various parts of the country, killing, maiming and robbing miners of their gold.

The Zimbabwe Environmental Law Association (Zela) recently disclosed that the machete gangs had resurfaced due to loss of income and caused havoc between June and July.

“With many jobs and sources of income being disrupted and the high costs of basic commodities, many people are increasingly moving into the artisanal small scale (ASM) gold mining sector for the quick money they can get. A series of machete violence cases have been reported in June and July 2020,” Zela said.

“In Zvishavane, one man was injured following a gold rush. In Matobo at Nugget Mine, a machete gang violence case was reported. Reports of gang invasions were also recorded in Maphisa, Makwe, and Mvana and Gwanda with criminals and gold gangs escaping with cash, digital scales, and gold ore. Machete violence incidents have been recorded at a number of mines in Bubi where the criminal gangs managed to get away with gold ore.”

“There is need for more localised whistleblowers which feed into the security web to help to nip the matter in the bud. The Mines committee and the country in general should invest in understanding the foundations and feeding troughs of such behaviour for the sake of future planning that incorporates the risk reduction thinking,” he said.

“Lessons should be drawn through an in-depth investigative study and the behaviour decimated. The formalisation of small-scale miners who remain vastly informal is one of the biggest solutions advanced by the Mines committee and contrary behaviour has always been berated by the same,” he said.