Parly’s question and answer sessions should be more effective 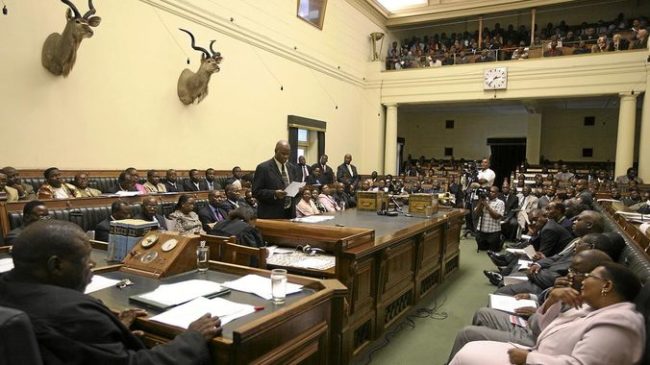 BY VENERANDA LANGA
Question and answer sessions have been some of the major highlights of Parliament as they are usually robust, expose MPs lack of research, and mostly expose ministers’ ignorance of policy issues under their purview and their bunking of the sessions.

In Zimbabwe, these are done on Wednesday in the National Assembly and Thursday in the Senate.

Since these are broadcast live on national television, MPs and Senators that are usually mum during debates of Bills and motions take part in question and answer sessions.
However, most of the questions asked by MPs are usually pertinent and touch on issues that affect Zimbabweans.

Bunking of question and answer sessions by ministers

In 2019, ministers were perennially absent to take questions from backbenchers in the National Assembly and Senate. Innocent Gonese (Mutare Central MP) and MDC chief whip Prosper Mutseyami constantly raised the issues with Speaker of Parliament Jacob Mudenda of absence of ministers during Wednesday’s question and answer sessions.

The Speaker was never defensive of the truancy by ministers in Parliament despite him being a member of the ruling Zanu PF party.

In September, Mudenda wrote to President Emmerson Mnangagwa twice, advising him of the truancy of his ministers during question and answer sessions in Parliament.

This was after a handful of ministers had availed themselves in Senate and the National Assembly to take questions from MPs. On average, around 10 ministers and deputy ministers avail themselves for question and answer sessions. As a result, most questions that are specific to their ministries end up being responded to by the leader of government business in Parliament, Ziyambi Ziyambi.

The effect has been that although Ziyambi is well versed with different government policies, he might not specifically know everything. For example, if an MP wants to know if stophavine and donus are good anti-retroviral treatment drugs, Ziyambi as a legal person might not be able to give a satisfactory response to that issue which needs a health expert to do so.

Mudenda even described the absence of ministers as appalling and pathetic, adding that it was high time that truant ministers were charged with contempt of Parliament.

Despite the Speaker’s letter to the President in September, ministers continued to bunk the sessions and no minister has ever been charged with contempt of Parliament for truancy.
This is despite that when ministers were appointed soon after the removal of the late former President Robert Mugabe, they promised to hit the ground running and to be different from the old era of ministers who were also known for truancy.

Every Wednesday, Mudenda reads a list of ministers who would have given apologies and cannot attend question and answer sessions due to foreign travel or other commitments.

In September, Nyambuya said: “It is most regrettable and I can assure you that we are going to bring this to the attention of the President. We obviously have some ministers who are on duty elsewhere, but I am sure and convinced that there are other ministers somewhere out there who did not come for question and answer session.”

Every Thursday in Senate, Chinomona and her deputy Nyambuya have to announce the names of the ministers present as if it is a big favour that they are present.

Whenever ministers are not present, or have bunked Parliament question and answer sessions Ziyambi as leader of the House, is then asked to respond on behalf of those absent ministers. But the problem is that Ziyambi cannot be expected to know everything.

For example, on January 30, 2019, Gwanda North MP Madodana Sibanda (Zanu PF) had a question directed to the Lands and Agriculture minister Perrance Shiri or his two deputies Douglas Karoro and Vangelis Haritatos, but they were absent. They were not also announced on the Speakers’ list of ministers that had tendered their apologies to be excused from question and answer session.

Sibanda had to refer the question to Ziyambi: “What is government policy regarding the use of third tier farms – farms that are meant for grazing only because some of the farms are being subdivided into plots?”

Ziyambi, as Justice minister, could not answer the policy question which needed specifically any of the three agriculture ministers.

His response was: “I request the MP to put the question in writing because it is a specific question.”

“Is the leader of government business aware that there is a ruling of the Supreme Court which bars Zimbabwe Consolidated Diamond Company (ZCDC) from mining in Marange? There are also recommendations from the Portfolio Committee of Mines which recommended that ZCDC is an illegal entity and that the concessions must go to the former owners. Is the President aware of this before his approval of the diamond policy?”

The Mines minister Winston Chitando and his deputy Polite Kambamura were not present and Ziyambi was forced to respond.

“I will bring it to the attention of the minister so that he can come back to the House with a more informed answer which speaks to the judgment of the Supreme Court,” Ziyambi responded.

These two examples show that it is important for ministers to avail themselves for question and answer sessions so that they respond to policy questions pertaining to their ministries.

It is disappointing that due to truancy of ministers at question and answer sessions, most written answers to questions, which are actually questions asked in advance and printed on the Parliament Order Papers have been deferred – most of them have clocked several months without being responded to.

For example, Parliament National Assembly votes for September 4 2019, show written questions with notice that were deferred from June and July, which means that the responsible ministers had not responded to the questions from MPs for three months.

For instance, Chitungwiza North MP Godfrey Sithole (MDC Alliance) asked a written question with notice to Local Government minister July Moyo on June 12 which was not responded to for three months and continued to appear on the National Assembly Order Paper in September.

The question had asked Moyo to give an update on the number of people on the housing waiting list for Chitungwiza Municipality.

Another example is a written question by Mhangura MP Precious Masango (Zanu PF) who wanted Shiri to apprise the House on measures being taken to curb the alleged corruption involved in the selling of maize at a Grain Marketing Board depot in Mhangura.

Masango’s question was asked on June 12, 2019 and by September 4, 2019 it still appeared on the National Assembly Order Paper because it was not answered.

These are just examples as there are several written questions pertaining to serious economic and political issues that have clocked months on the National Assembly and Senate Order Papers without being responded to by ministers. Every week, they would be deferred.

For some questions, the First Session of the Ninth Parliament came to an end without them being responded to by the responsible ministers despite that they were written questions with notice.

Significance of question and answer sessions

The United Kingdom House of Commons information office says parliamentary question and answer sessions are significant as they allow MPs to hold members of the Executive to account.
“They allow Members of Parliament to hold the government to account, using either oral questions to ministers in the Chamber of the House of Commons or written questions,” they said.

Written questions are made in advance and they appear on the Order Paper. These allow MPs to ask for information from ministers on their work, government policies and even the work of government departments. MPs can also ask about developmental issues pertaining to their constituencies, for example, an issue about lack of schools in their constituencies.

The Southern African Parliamentary Support Trust in its paper on questions and answers in Zimbabwe’s Parliament said the question without notice segment is confined to policy issues, where backbenchers quiz ministers on policies under their purview.

However, MPs are allowed to further probe if the minister does not give a satisfactory answer by asking supplementary questions related to the question.

Too many MPs in the National Assembly

The fact that the National Assembly has 270 legislators has made it very difficult for an MP to be chosen by the Speaker and be given a chance to pose a question without notice. However, a better plan was devised whereby political party chief whips write down names of their MPs who will ask questions.

However, some MPs who are very vocal and hardworking have always taken every chance to be noticed by the Speaker through asking supplementary questions.

In Senate, those Senators that have never asked any questions are probably very lazy because they have no problems of numbers.

Quality of questions asked during question and answer sessions

While MPs are given induction training as soon as they are sworn in, some have been very slow in mastering Parliament procedures, and the do’s and don’ts of question time.
For instance, on several instances, Mudenda has embarrassed different MPs for asking a question which has been asked and responded to before.

Some of the most common repetitions by legislators are questions on partisan food aid, agricultural inputs, and others which Mudenda has often had to remind MPs that the question was asked the previous week. This exposes that some MPs do not read, research, or they ask questions so that they can just be recorded as having said something in Parliament by the Hansard.

Senators also have the habit of asking ministers on Thursdays, the same questions that would have been asked by MPs in the National Assembly on Wednesdays.

For example, on January 30 soon after people were shot during the fuel protests, and this was followed by gross human rights abuses, Ziyambi was asked very challenging questions both in Senate and National Assembly on the human rights situation in the country.

Quality of responses during question and answer sessions

Some questions raised by MPs in Parliament also expose ministers’ ignorance and lack of knowledge of their ministry policies.

On several occasions, Ziyambi has rushed to the rescue of ministers and their deputies who show lack of understanding of their portfolios or government policies.

Section 107 (2) of the Constitution reads: “Every VP, minister and deputy minister must attend Parliament and Parliamentary committees in order to answer questions concerning matters for which he or she is collectively or individually responsible.”

Gonese raised the issue of non-attendance of the two VPs at question and answer sessions.

“Ever since we started the Ninth Parliament I do not recall a day when any of the two VPs attended question and answer sessions and I am not sure whether they are aware of section 107 (2) of the Constitution to attend Parliament and answer questions. Can you also make a follow up on the VPs,” Gonese said.

Mudenda responded: “I have not received any explanations, but I have asked the Clerk of Parliament Kennedy Chokuda to phone the chief secretary to Cabinet Misheck Sibanda to ask where the ministers are.

“Let me also advice the House that this has been the worst non-attendance by ministers and whatever answers we get from Chokuda, I will make sure this gets to the attention of the President,” Mudenda said.

The post Parly’s question and answer sessions should be more effective appeared first on NewsDay Zimbabwe.