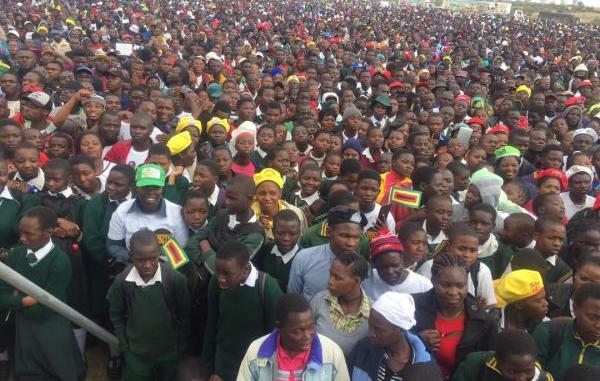 OPPOSITION political parties and civic groups have scaled up the campaign against frog-marching of schoolchildren to political rallies, thus exposing them to attacks.

Mthwakazi Republic Party spokesperson Mbonisi Gumbo yesterday said schoolchildren were not voters and should not be forced to attend Zanu PF events.

“MRP is disturbed by Zanu PF’s behaviour of illegally force-marching our children to its campaign rallies to add up its numbers. Last Friday, Mnangagwa had a rally in Gwanda, Pelandaba Stadium, where people were bussed from outside Gwanda before schoolchildren were dragged from local schools to the rally. One of our candidates was surprised to hear that his daughter, a Grade 7 pupil, was part of the rally,” Gumbo said.

“This Monday, our comrade went to the girl’s school to understand about the incident. The school head told him that it was a directive from his bosses. He was then referred to the district education offices. He went there, but the district office directed him to the provincial office, where one officer told him to go to the provincial administrator’s office.”

He said the party official was later told that the children were meant to sing the national anthem for Mnangagwa.

Zapu spokesperson Iphithule Maphosa said his party had always been against bussing of children to political rallies.

“Imagine what could have happened at White City had it not been a weekend.

We could be talking of more injuries and deaths from a stampede by panicking children. Also, if Zanu PF left one of their own, Joshua Malinga, on the stage alone on an exploding high table, would they have taken care of the school children?” Maphosa asked.

“No children must attend rallies of political parties as they do not vote. The safety of our children is a priority over political mileage.”
Rural Communities Empowerment Trust (Rucet) Lupane co-ordinator Vumani Ndlovu said forcing children to attend political rallies was unconstitutional.

“Furthermore, it exposes them to hate language, which is a norm at political rallies. Usually, the innocent children are taken from schools, deprived of their precious school lessons,” he said.

The Lucia Matibenga-led faction of the People’s Democratic Party spokesperson Fortune Mlalazi said rallies must be attended by people at their own will.

“We must abide to international laws protecting our children and we must not subject them to political sloganeering and all other risks that are associated,” he said.

“As you can see, that we are drawing closer to the elections and the electoral mood is heating up, we have bombs. Imagine our children being subjected to that.”

#ThisConstitution leader Abigail Mupambi said for long, they had condemned frog-marching schoolchildren to rallies, particularly by the ruling party.
“In 2016, we petitioned then Education minister Lazarus Dokora over this issue, but as you know, Zanu PF is always Zanu PF. They will never listen to the voice of reason,” Mupambi said.

“They seem to continue floating on top of the law by commandeering children to their rallies. This is unfortunate. The habit has to stop.”

MDC spokesperson Kurauone Chihwayi said the mysterious explosion at the weekend proved that rallies were not safe for the disabled and children who cannot defend themselves or escape.