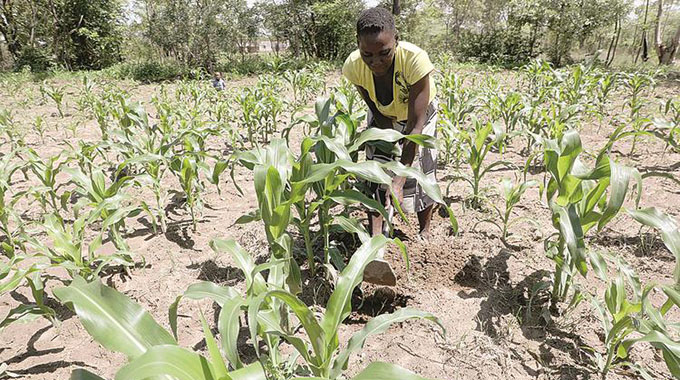 The bulk of the early planted maize under Pfumvudza has germinated with most farmers now in the process of weeding.

Some farmers said they were receiving top dressing fertilisers.

In some areas such as Goromonzi and Chikwaka villages, farmers planted with the first rains in October and the crop has reached knee-level. The late planted crop has also germinated and farmers are happy with the germination rate.

Chikwaka farmers said the Pfumvudza concept helped in suppressing weeds, and will not take time to remove the weeds as some of the areas are covered by mulch.

“I want a high yield. I planted with Compound D fertiliser and I had to source more fertiliser on my own so that I can get high yields.

“I expect top dressing fertiliser anytime from now,” she said.

Mrs Tinawo Nyarumbe of Chigidi Village in the same area said she was encouraged by the high rate of germination under Pfumvudza.

“I can see the difference with the conventional method. My crop germinated well and is looking healthy. I applied manure before planting and I planted with fertiliser.

“All the farmers who adopted Pfumvudza have a thriving crop,” she said.

Mr Danny Chamakore of Rukainga Village said his crop was looking well and hopes the rains will continue.

“All provinces have received effective rains. Some farmers planted with the first rains but generally the crops are in good condition,” he said.

Pfumvudza is one of the concepts under the Agriculture Recovery Plan, which is being spearheaded by Government to boost food production, ensure national food security and save foreign currency that would otherwise be used to import grain.

Meanwhile, police and other security services have intensified monitoring and security of inputs. The surveillance targets distribution, movements to Grain Marketing Board (GMB) depots and accountability by all officials and community members involved in the scheme to curb thefts and abuse.

This follows reports of theft and misuse of inputs and arrests of suspects in several parts of the country.

Lands, Agriculture, Water and Rural Resettlement Ministry had to engage relevant authorities including police to curb the malpractice.

National police spokesman, Assistant Commissioner Paul Nyathi, yesterday said Government made it clear that Pfumvudza inputs were not for sale.

“In this regard, the public should report all beneficiaries, officials and individuals who are approaching farmers to acquire the inputs for resale in hardwares and shops in the country.

“Police commanders in all parts of the country have been put on high alert to ensure that all suspects are accounted for,” he said.