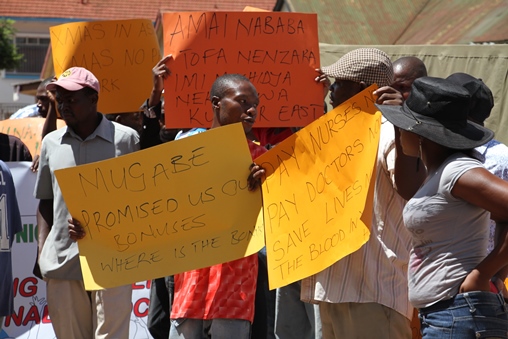 © ZIMBABWE’S education sector will — for the umpteenth time — be disrupted if teachers go on to execute their threat to strike.
Three months ago, teachers had to call off yet another strike following government’s overtures at looking into their grievances.

However, while calling off that particular strike, teachers — who constitute the bulk of the entire civil service — were clear that they would walk out of their jobs if government did not meet their demands.

As things stand, civil servants have been pestering their employer for better pay and working conditions, with government offering token adjustments, which have not matched the rate of inflation. The increases have been eroded by the wave of increases in the prices of goods and services in the past few months.
Government recently increased salaries for its employees by between 13 and 29 percent, leaving the lowest paid worker getting RTGS$600.

The Amalgamated Rural Teachers’ Union of Zimbabwe (Artuz) and Progressive Teachers’ Union (PTUZ) have given government 14 days’ notice to strike if their employer does not open up to fresh salary negotiations. One of the major demand by the teachers is for the payment of their salaries in United States dollars.

One of the reasons for this demand is that the USD will preserve value unlike the RTGS$. On the ground, prices of fuel, bus fares, and other basic commodities have been shooting through the roof. On the other hand, medical fees have been going up as well as medical insurance premiums.

Drugs and other key medical procedures as well as equipment are being charged in US dollars. School fees have also gone up significantly in the past term.

What is worrying though is government’s seemingly insensitive response to its employees’ grievances. While Artuz and PTUZ are not the only representative bodies for teachers, other unions in the education sector and the rest of the civil service have all voiced the same concerns.

It is only logical that government should address these and other concerns if they still want their employees to have faith in them.
Besides, the net sufferers if teachers go on strike are the learners.

Even if the teachers report for duty, it appears their morale will be very low thus compromising the quality of education they will impart.

Government has so many other areas to attend to but they should lend their employees an ear as urgently as possible.