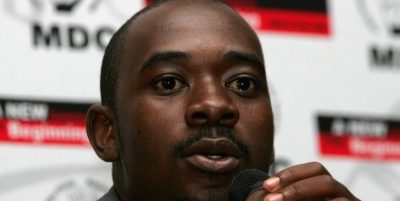 Chamisa has been nominated by all the six provinces that have held their congresses so far, eclipsing his rivals Douglas Mwonzora and Elias Mudzuri, who are yet to get any
nominations for the top post. MDC has 13 provincial structures.

Chamisa’s allies have also picked nominations for influential posts to be contested at the May 24 to 26 congress.

However, the former Kuwadzana MP’s surge could be halted if the urgent High Court application by a Gokwe-based MDC official Elias Mashavire to stop the congress succeeds.

Mashavire, who is believed to be a member of a rival camp seeking to stop Chamisa’s ascendanc,y filed the court application on Friday.

Chamisa is the first respondent in the case while vice-presidents Morgan Komichi and Elias Mudzuri, secretary-general Douglas Mwonzora and organising secretary Amos Chibaya have also been cited.

Zimbabwe Congress of Trade Unions secretary-general Japhet Moyo is cited as the seventh respondent in the court application under case number HC8697/18.

“The determination of the above application many have the effect of nullifying any actions led and or presided over by the second respondent, Nelson Chamisa,” reads part of the application.

“Further, the determination of that application may also have the effect of compelling the first respondent to convene an extra-ordinary congress as opposed to the ordinary congress that has already begun.”

On September 24 last year, Mashavire approached the High Court seeking a declaration that Chamisa was not the party’s legitimate leader as he had not been endorsed by an extra-ordinary congress.

High Court judge Justice Edith Kuda Mushore reserved judgement on the matter on March 14, 2019, a week after Chamisa issued a notice that the opposition party would convene its congress between May 24 and 26.

Mashavire insists that MDC’s structures that were elected at the last congress in October 2014 must remain in place until October this year.

“The ordinary congresses being convened and conducted are therefore unconstitutional and legal,” he added.

“I believe it is a ploy by the second respondent (Komichi and Mudzuri) to create structures that are aligned to him, as is already confirmed by a letter send to the fourth
respondent (Mwonzora) and seventh respondent (Moyo) and chairperson of the independent electoral commission of the MDC.”

He argued that Chamisa took over the leadership of the MDC and was using “the usurped powers and authority to deliberately decimate and re-arrange the party structures in
order to predetermine the presidential race.”

Mashavire said Chamisa has already changed the 2014 party structures to his prejudice as he was no longer a delegate at the forthcoming congress.

Mudzuri told this publication last month that the MDC must first hold an extra-ordinary congress to choose Tsvangirai’s successor using 2014 structures. He also referred to
Chamisa as the vice-president.

Tsvangirai died in February last year after a battle with colon cancer.

Meanwhile, MDC provincial congresses have allegedly been marred by manipulation of structures, violence, intimidation of Chamisa opponents, with voting going into midnight.

The process has left some party bigwigs frustrated as some are being thrown by the wayside.

“The provincial elections were marked by what was clearly a choreographed pattern of intimidation, vote rigging and open violence to supporters of Chamisa’s rivals,” one official said.

“The pattern began with the delayed commencement of the voting process and ended with the announcement of Chamisa and his slate as the winners in the dead of the night, after midnight in all three cases.”

However, the party’s spokesperson Jacob Mafume claimed the process had gone on very well.

“Our provincial congresses are meeting the standard of democracy and complying with the MDC constitution,” he said.

“The history of congress is that, it can only end when business on the agenda is all dealt with. In any case, we have not received any formal complaint from anyone.

“Our constitution provides for a dispute resolution mechanism and if one has a challenge around the elections, it will be dealt with before the main congress.

“We are so quite happy with the way we have handled our process so far.”

Chamisa has in the past accused Zanu PF of trying to influence the outcome of the MDC congress.

The post Plot to derail Chamisa appeared first on The Standard.

There is no water crisis in Bulawayo: Consultant

Bulawayo gets water once a week