Poetic justice for the notorious robbers 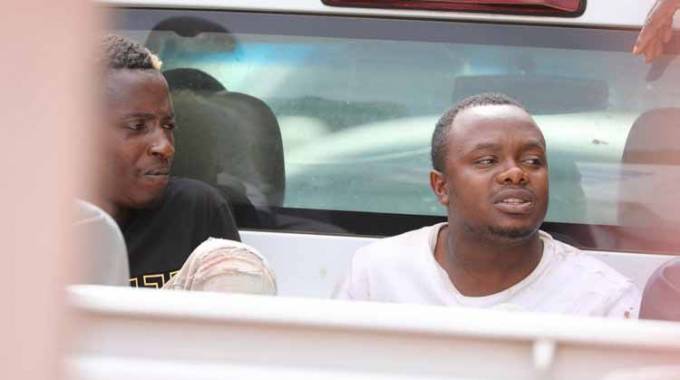 This aptly captures the bloody shootout between the Zimbabwe Republic Police and a notorious gang of armed robbers, five of whom died in the fire exchange in Harare.

One of the suspected robbers, Stanely Mateko, survived the shooting and was placed under hospital custody by magistrate Ms Rumbidzai Mugwagwa.

The other two surviving robbers — Godfrey Mupamhanga (27) and Prince Zakeo (25), both of Highfield — were denied bail and are languishing in remand prison.

The three are thought to be part of a gang of 10 armed robbers led by feared crime lord Musa Taj Abdul and have been on the police wanted list for two decades. Abdul is believed to have escaped to his hideout in South Africa, where he has orchestrated high-profile heists in Zimbabwe since August last year.

According to national police spokesperson Assistant Commissioner Paul Nyathi, the gang allegedly committed nine robberies. Some of the latest alleged spate of robberies include the movie-style heist on forex dealers at Makoni Shopping Centre in Chitungwiza in February.

Information on gang leader Abdul, who is also known as Musa Mohammed or Kedha, is still thin on the ground but sources claim he has previously worked with other notorious armed robbers such as Gift “Tyres” Mwale, who was gunned down in a shootout with police 11 years ago.

Abdul has managed to evade the long arm of the law for so long after leaving the country for South Africa where he is believed to be linking up with other armed robbers who have ambitions to scale up operations to a regional level.

According to our sources, the only time that Abdul is in the country is to execute well-planned and thought-out heists smash and grab style. It has been claimed that his network includes well-paid informants as well as police officers, who regularly leak investigation details.

In South Africa, Abdul is thought to have been arrested several times but released with the help of his police connections.

“The rest of the gang members are young unemployed boys recruited here in Zimbabwe or South Africa,” said a source.

“Police are closely looking at him. He has made a lot of mistakes lately, one more error and he will be gone. He has probably managed to bribe some police officers in the past to get information, but it is now too risky because he is attracting attention from the highest offices.”

Since August last year, Abdul is alleged to have commanded a gang of no less than 10 robbers armed with lethal rifles such as the AK47. According to a police charge sheet, arrested gang members are facing four counts of armed robbery and unlawful possession of firearms.

Investigating officer Detective Assistant Inspector Simbarashe Maruziva revealed that the value of property stolen and potential prejudice amounts to US$375 150, ZAR 50 300 and ZW$62 000.

The notorious gang hit its targets starting from December 20 2019 at around 3.30pm, demanding cash and valuables. In one of the heists, the gang allegedly pounced on Culdees Honye (33), Wilfred Motsi (51) and Cornelius Mutandwa at Wessec Sol Enterprises. Another victim is Brighton Chigura (29).

The robbers pointed firearms at Honye and ordered her to lie down before they grabbed Motsi, who was a customer making inquiries, searched him and took his Tecno Spark 4 and Samsung cellphones.

The robbers took the two safes and loaded them into an Isuzu KB 240 single cab truck owned by Motsi.

The other robber took money from the till and grabbed Motsi’s Tecno Spark 3 cellphone and Tecno tablet.

The gang also confronted Mutandawa, a security guard with Fawcett Security, and disarmed him of his service firearm, a 38mm Rossi revolver with five live rounds of ammunition.

They drove away in the stolen vehicle which was later found abandoned in the Arcturus area together with the two safes which had been forcibly opened.

In another case, the gang broke into one Jealous Chuma’s house on December 30 2019 at around 11pm. While inside they assaulted Chuma with logs and shovels demanding cash and valuables.

They allegedly drove to Makoni Shopping Centre aboard a white Toyota Hilux Double Cab on February 5 2020 at around 2pm. Upon arrival, they fired several shots into the air from their pistols and an AK47 rifle before confronting the victims, whom they assaulted with metal bars demanding cash and valuables.

One of the robbers, who was brandishing an iron bar, broke Jairos’ motor vehicle windows — a Toyota Allion — and ordered him to surrender his firearm.

The gang then searched Simbisai’s motor vehicle and took a bag, which had ZW$37 000 and a Samsung S9. They allegedly barged into Jairos’ car and drove off at high speed following their getaway vehicle towards Dema.

Operating in usual style, the gang allegedly approached their targets on February 26 2020 at around 7.50am.

They confronted Dangarembizi, who was standing beside his motor vehicle in his garage at home.

They assaulted him with open hands demanding cash and valuables before taking US$3 000 from his pockets.

The robbers demanded more cash and force-marched Dangarembizi into his main house which they ransacked and stole US$37 000 cash, jewellery, several shoes, an Apple laptop and car keys which were in his bedroom.

They went on to open a gun cabinet where they stole a 9mm Star pistol and 120 rounds of ammunition. They also stole a Samsung AZ core and a Huawei Nova 4, which were in the house.

They force-marched Dangarembizi at gunpoint to his garage where they ordered him into his Honda Fit. The other robber took charge of a white Hyundai belonging to the businessman.

The gang then demanded to know the whereabouts of Tawanda Nyambirai, who is the owner of TN Holdings situated next to Dangarembizi’s home.

Dangarembizi led the gang to TN Holdings premises where they confronted other complainants. The gang searched Dumisani Dube and stole US$250, an HP laptop and his Samsung J1.

The robbers demanded to be taken to the offices of the company’s CEO and the location of his safe. Dube led the accused to the CEO’s offices situated on the second floor.

They forced open the office’s door and stole a Chubb safe with US$180 000 cash and an Acer laptop.

The robbers loaded the safe into a Hyundai vehicle, which they had stolen from Dangarembizi and drove away.

They later dumped the two stolen vehicles at Mazowe Citrus kiosk ion the Harare-Bindura road. Dangarembizi lost US$227 250, ZAR 28 000 and two motor vehicles valued at US$10 000.