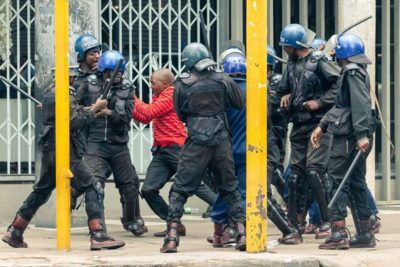 HARARE deputy mayor Luckson Mukunguma was yesterday forced to abort a full council meeting he was chairing to escape through the window and run barefoot after police besieged Town House and arrested 21 councillors over alleged land scandals.

Mukunguma could not even have the chance to put on his shoes as he sped towards Copacabana commuter bus terminus wearing socks only after the police raid at 5:30pm which also affected three journalists, Takunda Mandura of Open Parly ZW, Munashe Chokodza of 263Chat and Blessings Chidhakwa from The Herald, who were covering the full council meeting.
Media Institute for Southern Africa Zimbabwe chapter’s lawyer Chris Mhike was deployed at the police station to secure the journalists’ freedom, who were detained despite showing the police their Press cards.

The 21 councillors were taken to the Harare Central Police Station for yet unknown reasons.The three journalists were later released without charge.

“I will have to check,” he said. Harare mayor Jacob Mafume said he was not aware of the arrests as he was away attending the Harare Agricultural Show.

“I am not aware of what really transpired as I was not part of the meeting. I was attending the Harare Agricultural Show,” he said.

Information secretary Ndavaningi Mangwana confirmed the arrests, but he did not give further details.

“The fight against corruption continues unabated. Truckloads of Harare City councillors are on the way to Harare Central Police. The fight is real,” Mangwana tweeted.

He also revealed that a warrant of arrest had been issued against Chitungwiza mayor Lovemore Maiko and his deputy Musa Makweza.