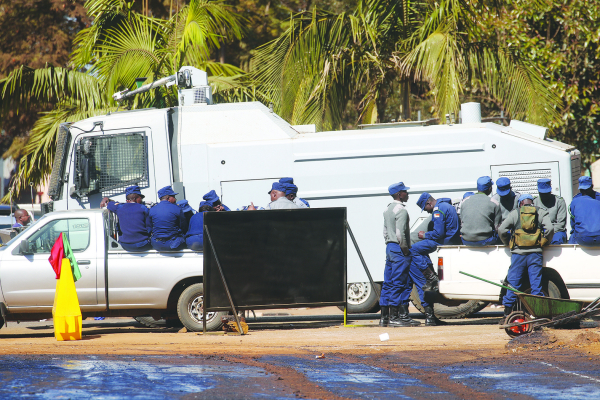 STATE security agencies in Harare yesterday sealed off all strategic points previously used by the opposition for demonstrations as political tension continues to mount ahead of Monday’s general elections.

As early as 6am, police had mounted water cannons and deployed heavily on all roads leading to the Zimbabwe Electoral Commission (Zec) offices and at the Robert Mugabe Square in anticipation of protests by opposition activists.

The opposition’s other favourite hunting ground, Africa Unity Square in the central business district, has also been taken up by a week-long State-organised cultural event, in a move described by the opposition as a well-planned clampdown on democracy.

The latest heavy police deployment came shortly after a ban on the MDC Alliance’s planned demonstrations to demand transparency in the electoral processes.

MDC Alliance spokesperson Welshman Ncube said “the ban and heavy police presence shows that the mask was coming off the monster and will come out in full force, with all its horns if President Emmerson Mnangagwa wins the forthcoming polls”.

He said it was clear that Mnangagwa was pretending to be a reformed leader to lure people to vote for him, adding “slowly, the sheep’s clothing on the wolf is coming off. There is no difference between former President Robert Mugabe and Mnangagwa”.

“He (Mnangagwa) has banned our demo and the deployment of the police in and around Zec offices shows the hyena is finally coming out. Zanu PF has been what it is and will remain like that. A leopard doesn’t change its colours and we had always known that the pretence of the so-called new dispensation would come to an end if they win this election, the monster will come out with all its horns.”

National Patriotic Front spokesperson Jealousy Mawarire said: “It is good he (Mnangagwa) has done this in the presence of foreign observers. If he wins in the forthcoming elections, the country will be a complete military State where the people will be flogged for holding different.”