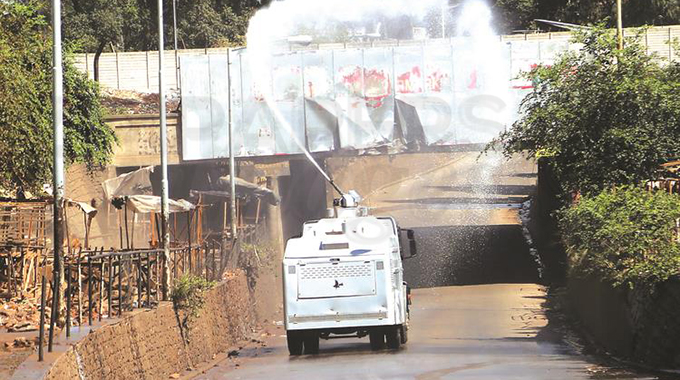 The chemicals used during the fumigation are being supplied by Harare City Council.

National police spokesperson Assistant Commissioner Paul Nyathi said the exercise was a partnership between the police and the council to fumigate high risk areas.

“We have partnered City of Harare to fumigate some areas in and around the Central Business District (CBD). The local authority has supplied chemicals and the police have availed public order vehicles. This is to ensure public safety in the wake of Covid-19. We have already fumigated Mbare musika, the down-town area, Copacabana, Market Square, RoadPort, Mupedzanhamo market and other places. The exercise will not end there as we are planning to fumigate more places,” he said.

Along with these preventative interventions, the police continue enforcing the law, arresting 390 more people on Thursday and yesterday for defying the lock-down directive bringing the total arrests to 875.

They were mostly arrested for illegally opening their bars, operating shebeens, vending and loitering among other offences. They were fined between $200 and $500 each.

“We continue to urge people to comply with the directive and other measures which are meant to protect them from this pandemic. As police, we are there to enforce the law. We are appealing to the public to be compliant and avoid being arrested,” he said.

He said the police will continue to monitor the situation across the country and ensure everyone is compliant.