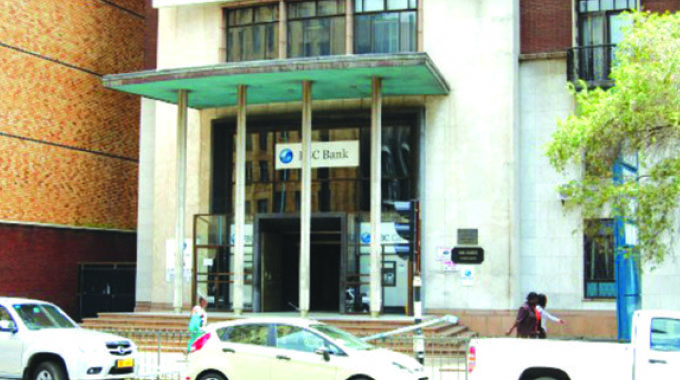 Business Reporter
Financial services group FBC Holdings Limited is confident that the fiscal and monetary policy interventions being pursued by Government will provide the bedrock for strong economic growth.

The new dispensation has taken bold steps to rejuvenate the economy after years of stagnation by championing bold fiscal and monetary reforms, which began in October 2018, guided by the Transitional Stabilisation Programme (TSP).

Already, a string of austerity measures are being implemented amidst adoption of an interbank foreign currency exchange system in February this year and the introduction of the reference RTGS dollar in the basket of multi-currencies.

The interventions are expected to stabilise the financial services sector, arrest parallel market distortions and entice fresh investment, both local and international.

“Along with the rest of the nation, we remain optimistic that the fiscal and monetary interventions that the Government is pursuing will yield the desired results, providing the bedrock for strengthening our business development initiatives,” FBC board chairman Hebert Nkala said in a statement accompanying the group’s financial results for the year ended December 31, 2018.

“Fiscal consolidation through containment of the fiscal deficit to sustainable levels, have been the key stabilisation objective of the TSP and the 2019 National Budget.

“Preliminary indications are pointing to a change in approach in the management of public finances, with the Government recording surpluses since December 2018.

“The commendable progress will significantly support the stabilisation of the economy as well as attract investment. It is our hope that Government will continue to consolidate its fiscal discipline for the long term benefit of the nation.”

According to the Treasury Quarterly Bulletin (2018 Fourth Quarter) released recently, the country recorded “a phenomenal” budget surplus against a background of improving revenue collections. Revenues rose by 43,4 percent to RTGS$1,69 billion, surpassing the set target of RTGS$1,18 billion on the back of the implementation of austerity measures. Revenue collections by Zimra also topped RTGS$2 billion in the first quarter of 2019, above target by 41 percent, according to the tax authority.

Under the TSP Government targets macro-fiscal stabilisation; building a conducive investment environment and launch respective quick-wins to stimulate and sustain a renewed private sector led growth economy; reintegrating the country into the global economy; and promotion of sound and good governance as an essential ingredient for socioeconomic cohesion and development. The reform areas are seen as critical in providing a foundation for “strong, shared and sustainable growth and development”.

However, Nkala said inflationary pressures remain a major concern as they affect general business operations and consumer spending due to increased costs. The trend is expected to ease during the second half of 2019 as policy measures take shape. Going forward the FBC board chair said his group will scale up digital transformation, investment in ICT capabilities and strengthening compliance and risk management frameworks as key enablers of business growth.