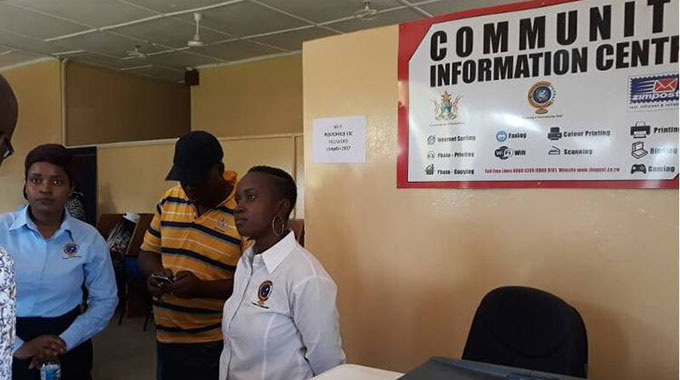 One of the information centres built by Potraz

Work on the information centre is expected to commence anytime from now, with the facility targeted to be operational by year end.

Potraz is concluding budgets for the community information project, which is set to be among many others dotted across the country.

The information centre will comprise a communication centre with computers and internet access facilities, a training centre for skills development as well as a gaming area.

“We want to thank the community for the gesture and we will build a facility to give essential communication services” Mr Chaibva told thousands of people who had gathered for Potraz’s consumer rights and responsibilities road show at Manoti on Saturday.

The ongoing consumer rights and responsibilities awareness campaign comes amid growing complaints from consumers in the sector.

Concern has been raised on the quality of internet and data bundles many telecoms operators are offering consumers.

Mobile financial services, which fall under Potraz and the Reserve Bank of Zimbabwe’s purview, are also a major focus as complaints against the service providers grow due to various transaction glitches.

Potraz has set aside a significant budget for the awareness campaign, expected to jolt operators improve the quality of their service across the industry.

Sources from two mobile networks confirmed they had been increasing demand for better quality from consumers since the Potraz started its consumer rights awareness campaign, apparently confirming the effectiveness of the initiative.

The telecoms industry regulator pointed out that consumer education and awareness and safety formed part of consumer rights.

“Consumers have a right to be heard, to complain and redress as well as end or change a contract,” Mr Chaibva said.