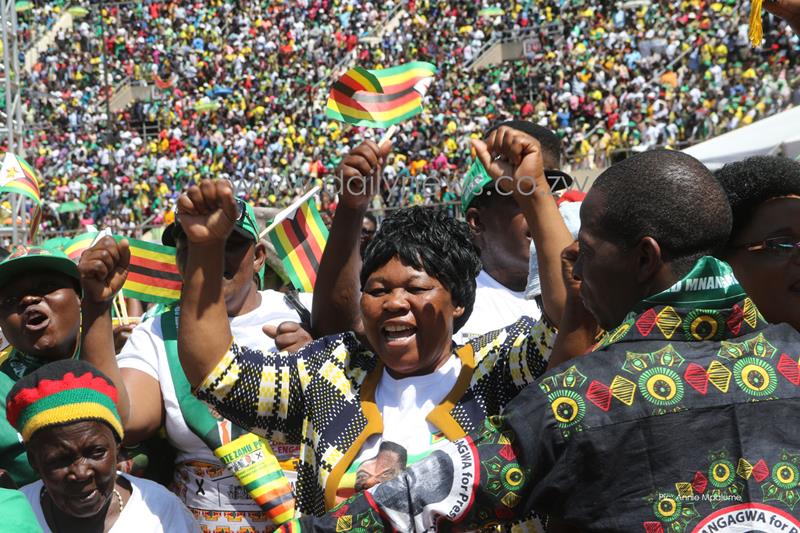 HARARE – Although Robert Mugabe is now part of history, the band of praise-singers that made him a demigod is still intact, singing itself hoarse in a rat-race to please President Emmerson Mnangagwa.

Observers opine that the apple-polishing and heightened fawning for Mnangagwa seen at the just-ended Zanu PF conference in Esigodini does not bode well for Zimbabwe.

Indeed, there is a connection between the old and new.

By Mnangagwa’s own admission, Mugabe who he removed through a coup last year “remains a father, mentor, comrade in arms and my leader.”

The parallels between the two men are almost infinite.

While addressing over 60 000 people who filled the National Sports Stadium in a frenzied mood after the fall of Mugabe, Mnangagwa paid tribute to the man who now regards him as a traitor.

“We must say thank you to him and trust that our history will grant him his proper place and accord him his deserving stature as one of the founding fathers and leaders of our nation,” he said.

At the height of the powers, Mugabe had songs composed in his name, children named after him and towns were given a face-lift just to ensure that his passage was comfortable.

And just like Mugabe days, Mnangagwa replicated the spectacle in Esigodini.

Mugabe might be long gone but Mnangagwa appears to be trapped in the same system that created his predecessor.

University of Zimbabwe political science lecturer Eldred Masunungure told the Daily News on Sunday that while there was a change of leadership last year, there was no change of the system.

“The regime has continued, leadership change will not result in a change of systems and that explain what is happening. Mnangagwa is just continuing from where Mugabe left,” Masunungure said.

The respected professor said Zanu PF, instead of focusing on the bleeding economy, is only concerned with power retention, referring to the stamped to endorse Mnangagwa as presidential candidate for the 2023 elections.

“The endorsements from provinces is something that happens where there is a preoccupation in the maintenance of power, they are doing so as if everything is in order when everything is actually collapsing.

“We have more of the same and this definitely looks like the old,” said Masunungure.

Just like in the past when towns were spruced ahead of Mugabe’s visit, the little township of Esigodini, where Zanu PF had its annual conference received a major face-lift ahead of the ruling party’s annual jamboree, a fresh lick of paint here and resurfacing of roads there.

“We are happy that the roads are being paved, of course, once they are done they will go and will not return again until maybe the next election,” an elderly man sipping local opaque beer said.

Writing on his blog, United Kingdom-based academic Alex Magaisa said the changes that Mnangagwa brought were superficial and not a serious attempt to walk away from Mugabe’s shadow.

He said the removal of Mugabe, “to the extent that this meant a transition from authoritarian rule to democracy, it was terribly mistaken.”

“The new rulers were the same men who had propped up and operationalised Mugabe’s ruling machinery. They weren’t democrats by any stretch of imagination. They wanted power, yes, but democracy was not a priority.

“It had never been a priority during their many years with Mugabe at the helm. They might perform some gimmicks here and there, to win the favour of the international community, but beyond those token gestures, the mean machinery with inherently authoritarian features would be maintained”.

It soon became clear that despite the smiles and clichés of being “open for business”, there were more continuities than changes from the old regime.

Magaisa said it has become a truism that Mugabeism managed to survive the departure of Mugabe and unless there are fundamental changes, it may live much longer after him.

“There has been no serious effort to disentangle the state from the grip of the party or to reduce the role and impact of the military in civilian affairs — both in the party and government.

“If anything, the coup enhanced the hand of the military and gave it confidence that it had not just a de facto but de jure role in the affairs of the party and government. The war veterans are still being an embarrassment, revealing their partisan and autocratic tendencies.

“Traditional leaders are still tied to the party and the system of patronage persists. Instead of strengthening public institutions, such as the electoral authority, the judiciary, prosecution authorities, the central bank and others, the ruling party still emasculates them,” Magaisa said.

Just like in the days of old when nongovernmental organisations (NGO) were banned for allegedly dabbling in politics, the acting minister of Public Service, Labour and Social Welfare Kazembe Kazembe is threatening to revoke licences of some NGOs that do not toe the line.