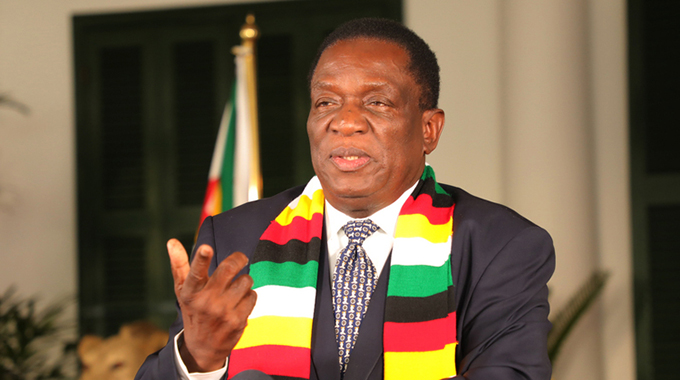 President Mnangagwa has ordered Treasury to release funds for the completion of rehabilitation works on the Chivi-Mhandamabwe Road which links Beitbridge Border Post to western parts of the country.

Rehabilitation works on the road stopped early this year owing to funding constraints after 30km out of 48km had been covered.

The road links Chibi Turn-Off Business Centre, off the Harare-Beitbridge highway, with Mhandamabwe Growth Point in the rural Chivi heartland.

Mhandamabwe is strategically located with a network that links it to Zvishavane and Bulawayo, Gweru, Masvingo City and Beitbridge, making the road a key passageway for goods and human traffic.

President Mnangagwa last week conceded that the Chivi-Mhandamabwe Road was of strategic importance to the national economy hence outstanding rehabilitation works should be urgently completed.

The President was speaking at the commissioning of the $8 million Chombwe Piped Water Scheme in Chivi after travelling by road from Masvingo City where he had an appreciation of the state of the upgraded road.

Rehabilitation and upgrading work of Chivi-Mhandamabwe was done by Bitumen World.

“However after travelling for a while I discovered that the road (Chivi-Mhandamabwe) was now in bad state maybe the last 12km of the road and I asked the Minister (of State for Masvingo Provincial Affairs and Devolution Ezra) Chadzamira what the problem is and he told me that upgrading work stopped after the contractor stepped aside when funds for the project dried up.”

President Mnangagwa said he had seen for himself that the road was a key artery for commerce judging by the number of heavy cross border trucks that passed through the highway while commissioning of the Chombwe Water Scheme was underway.

“I have witnessed first-hand the number of haulage trucks going as far as DRC and Zambia among other countries that use this highway (Chivi-Mhandamabwe) so I am directing you Deputy Minister (Finance and Economic Development Oliver) Chiduwa who is here to tell your boss (Finance and Economic Development minister Professor Mthuli Ncube) that he must look for funds to finish off this road project as a matter of urgency. He (Minister Ncube) knows where he will get the funds,” said President Mnangagwa.

Government, added President Mnangagwa, would continue to prioritise road upgrading projects such as the stalled Chivi-Mhandamabwe road as they were key enablers for socio-economic growth in line with Vision 2030.

Minister Chadzamira thanked the Second Republic for upgrading the highway saying it would stimulate economic activity in Chivi district.

Smallholder irrigation farmers at Chombwe and surrounding areas would be able to speedily move their produce to the market, boosting their income levels.

He noted that the upgraded Chivi-Mhandamabwe Road augurs well for Chibi Turn-Off which has since been gazetted as a business centre by President Mnangagwa.

The business centre is in the process of scoring a first by adopting the smart city concept in partnership with the Infrastructural Development Bank of Zimbabwe leveraging on its proximity to Tugwi-Mukosi Dam and the Harare-Beitbridge highway.

Upgrading of Chivi-Mhandamabwe has also breathed life into the Chivi economy with hundreds of locals getting hired as contractors, among other spin-offs.

Newer Post
2020: The year death robbed us with impunity
Older Post
Those who lacked leadership must admit failure to implement Supreme Court Judgement and let go