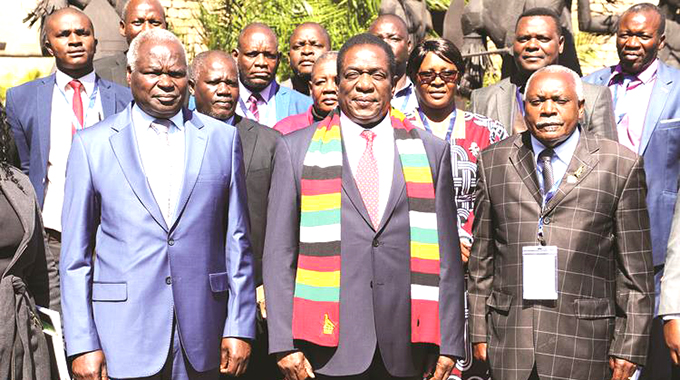 Blessings Chidakwa and Leonard Ncube in VICTORIA FALLS
Local authorities should be economic hubs with a transformative impact on the quality of life in communities and the nation as the country seeks to achieve upper middle income economy status by the year 2030, the President has said.

He said local authorities have more sources of revenue collection that are untapped and challenged them to be more creative as central Government’s attention will be on such councils and not crybabies.

President Mnangagwa said this while officially opening the third edition of the Rural District Councils Chairpersons’ indaba here, where he implored RDCs to deliver as they have the capacity to make Vision 2030 succeed or fail.

“We at the national level have interrogated this vision but it cannot succeed without the other tiers of Government, which primarily include yourselves (RDCs). We must all recognise that every one of us at every level is critical for the success of our vision.

“This platform is thus important as it provides us with the opportunity to interrogate and reflect on issues related to equitable and inclusive growth, harnessing the resource endowments within our respective communities,” he said.

President Mnangagwa said the majority of the country’s citizens lived in the rural areas and eagerly anticipated socio-economic development to cascade into their societies.

“As leaders who preside over these communities you should be at the forefront of crafting innovative strategies which stimulate production, value addition and beneficiation of resources in the areas under your jurisdiction.

“We need you to focus on the resources available in your districts. As RDCs when we speak of devolution we have you in mind. My Government will continue to support local authorities through policy guidance, financial and non-financial support, capacity building and technical back-up to improve efficiencies within your sector,” he said.

The President reiterated his call for every citizen to participate in building the economy, saying no one should be left behind even at household level.

He challenged Ministers of State in every province to be pro-active in the devolution agenda saying they should be the ones leading in project identification.

He also said in line with the new culture of dialogue there was need for increased collaboration, coordination and cooperation between RDC and their internal and external stakeholders.

“It is equally important for RDCs to network and share best practices among themselves and with their counterparts in urban councils.

“Better service delivery and the speedy improvement in the quality of life our people will be enhanced by such robust engagement within the sector, coupled with listening to the needs and perspectives of the communities we serve.”

The Head of State and Government also warned those engaging in corrupt activities to cease as he had given “teeth” to the new anti-corruption commissioners that were recently sworn in.

“Please all citizens be warned that acts of corruption will not be condoned or tolerated, l have created ‘teeth’ for the new team,” he said.

The President also reassured the nation that his Government will avail food to all deficient communities following the drought that affected the country this year.

The President said Cyclone Idai had opened their eyes to the new threats associated with climate change and need to re-think on disaster preparedness and response mechanisms.

RDCs association president Alderman David Mutasa applauded President Mnangagwa for accepting to interact with RDCs at the high level platform, as this was the first time since 2013.

He said under President Mnagwagwa’s leadership Zimbabwe was in safe hands and would easily achieve Vision 2030.