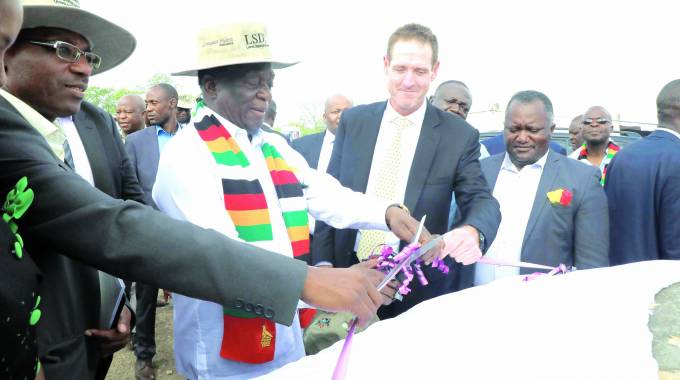 From George Maponga in CHIREDZI

PRESIDENT Mnangagwa yesterday commissioned a $600 million (US$40 million) Kilimanjaro Sugar Cane project which is expected to create 2 000 jobs in the next 12 months.

ln a joint venture between Tongaat Huletts, Government and local financial institutions, the Hippo Valley Estates project will see 4 000 hectares of virgin land being turned into massive sugar plantations for allocation to indigenous farmers on a cost recovery basis.

The project is expected to be completed by November 2020 and will produce an additional 50 000 tonnes of sugar per annum.

Speaking after the Kilimanjaro Project tour, President Mnangagwa said Government will continue to create a conducive business climate for the private sector to thrive.

“Government recently launched the National Investment Policy which reinforces our commitment to the protection of investors’ rights by upholding laws and principles governing private investment,” he said.

“It is most encouraging that our ongoing reform efforts have resulted in our country moving 15 places up in the recent global ease of doing business rankings.”

The President said the Kilimanjaro Project is a good example of a public-private partnership (PPP) success story.

He described the cane project as a milestone in Zimbabwe’s land reform programme.

“There shouldn’t be any quarrels over land between Tongaat Huletts, traditional leaders and the Masvingo provincial leadership.  The land belongs to the State, which I lead,” said President Mnangagwa.

“We agreed to develop 4 000ha with Tongaat and I want the project to be completed. No one, I repeat no one, should say I have the right to be there (the developed plots).  We are all Zimbabweans, we must follow procedure to get land.”

President Mnangagwa urged Tongaat to expand its operations for the benefit of the economy.

The President said the Lowveld and areas such as Binga, Kanyemba and Kariba that are close to water bodies should aim for high agricultural output by taking advantage of the nearby rivers and dams.

“We are very happy with the commitment coming from Government on 99-year leases, which guarantee long-term investments in Zimbabwe.

“Our main focus is not really on who has what land, but on improving yields so that we grow the sugar industry,” said Mr Hudson.

Lands, Agriculture, Water, Climate and Rural Resettlement Minister, Perrance Shiri, said Masvingo has the potential to spearhead growth through agriculture as Tugwi-Mukosi Dam is a giant water body which can successfully be harnessed for irrigation.

President Mnangagwa  also toured the Lowveld winter maize project in Triangle, where Tongaat has 300ha of the staple crop in partnership with Masvingo Development Trust.