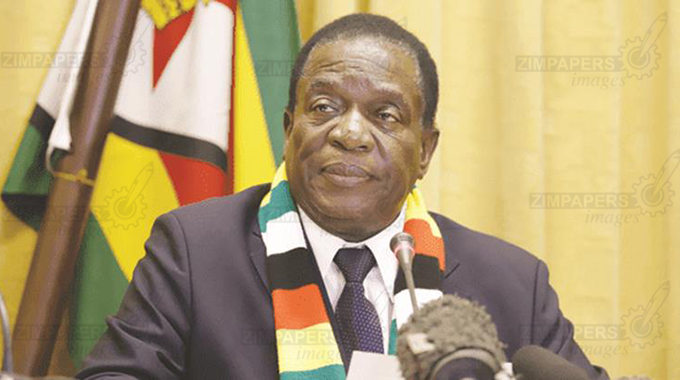 President Mnangagwa has urged rural district councils (RDCs) to participate in various ways on October 25 when SADC nations take part in the solidarity day against illegal sanctions imposed on Zimbabwe by the West.

August. Leaders of the regional bloc said there was need to take a stand and demand the unconditional removal of the sanctions which have wrecked Zimbabwe’s economy, and also negatively impacted on regional economies.

While addressing the first edition of the Rural District Councillors meeting in Harare yesterday, President Mnangagwa said it was critical that RDCs joined the rest of the country and the region in condemning the ruinous and illegal embargo.

“As you know our country has been under sanctions for the past 20 years and we discussed the issue at the just-ended SADC Summit and I am happy that this time, the SADC leaders agreed to speak with one voice,” he said. “That’s why they resolved that on October 25, we demonstrate against sanctions.”

President Mnangagwa said SADC countries had already indicated they will carry out various activities on that day, as they join Zimbabwe in criticising the illegal sanctions.

A number of political parties and civic groups have joined the call for the removal of the nearly 20-year embargo that has decimated local industry by denying the country access to international lines of credit.

SADC countries also took their call to the just-ended 74th United Nations General Assembly in New York, calling for the removal of the sanctions.

The Pan African Parliament (PAP), sitting in South Africa this week, debated a motion calling for the immediate removal of the sanctions imposed on Zimbabwe.

The PAP said its members were impressed by the reforms being undertaken by the Second Republic, adding that they warrant that Harare be given an opportunity to kick-start its economy without the burden of sanctions.