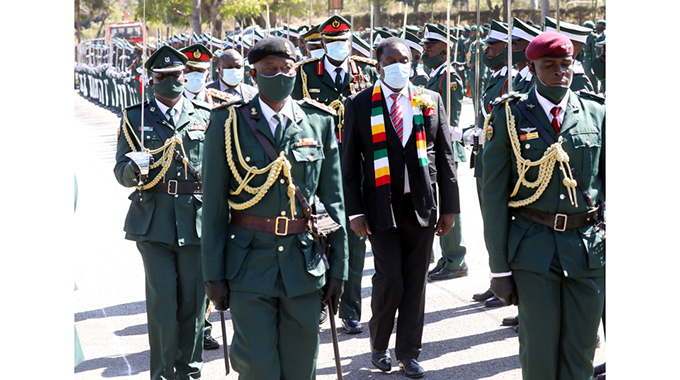 President Mnangagwa who is The Head of State and Commander-in-Chief of the Zimbabwe Defense Forces inspects parade before commissioning cadets at the Zimbabwe Military Academy in Gweru yesterday.-Picture: Eliah Saushoma.

President Mnangagwa has described as unfortunate, the denigration of Zimbabwean culture and history by some citizens who celebrate foreign cultures.

Speaking at the 37th graduation ceremony of 138 regular officer cadets at the Zimbabwe Military Academy in Gweru yesterday, the President said it was worrying that some Zimbabweans were lampooning the country’s culture, history and national symbols while endorsing alien cultures.

“I urge the new officers graduating today and other young people across the society’s spectrum to stand proud of our rich history and who we are as Zimbabweans,” he said.

This followed grumblings in certain quarters, particularly social media, over this week’s erection of a statue of the country’s iconic spirit medium, Mbuya Nehanda in Harare.

Mbuya Nehanda played an integral role during the country’s First Chimurenga before she was brutally executed by the white settler regime for being one of the inspirational forces behind the struggle against colonialism.

The President said Mbuya Nehanda’s statue was befittingly erected on Africa Day when the African continent celebrated unity and independence.

He urged the graduating officer cadets and the military to cherish the existing peace and recognise the great works by such iconic figures as Mbuya Nehanda.

“This event comes on the backdrop of the recent commemoration of Africa Day where our country joined other African States in celebrating the unity of the continent and reflected on the common aspirations top build the Africa we want.

“We witnessed the unveiling of the towering Mbuya Nehanda statue and monument in Harare’s central business district,” said the President.

He said the immortalisation of the iconic liberation heroine should help the graduating officers reflect on the importance of patriotism and loyalty to the country Zimbabwe.

“The resilience and warrior spirit of the legendary heroes and heroines must further inspire you to work harder, with dedication for the prosperity of this beautiful country,” said the President.

He said the country’s security forces should keep alive, the idea of maintaining peace and unity within the SADC region and the rest of the African continent.