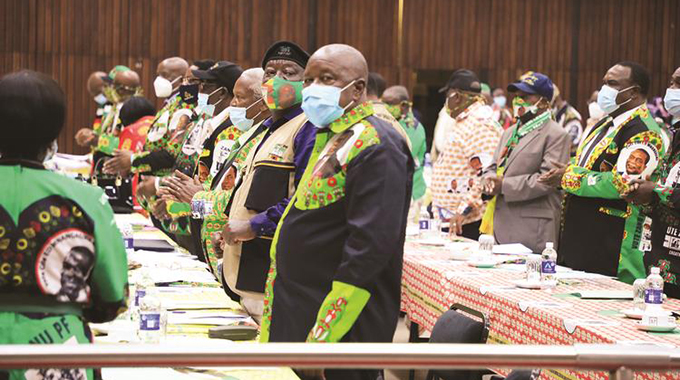 Senior Reporter
Zanu PF First Secretary, President Mnangagwa, has directed party structures to work with Government ministries and agencies for the success of National Development Strategy 1 and attainment of Vision 2030.

He said this on Saturday during a Zanu PF Central Committee meeting which discussed several issues that included the state of the party and the economy.

He said the Central Committee also expressed satisfaction with First Lady, Amai Auxillia Mnangagwa, with the charity and cultural work she was carrying out with her Angel of Hope Foundation being commended.

“The Central committee commended the efforts by His Excellency the President and First Secretary to modernise and grow the economy through his emphasis on productivity in all sectors under NDS1,” said Cde Khaya Moyo.

“All party structures were directed to work with the Government towards attainment of Vision 2030 through mobilising the people to participate in development programmes.”

Cde Khaya Moyo said the great work of the First Lady did not go unnoticed by the Central Committee, which welcomed several philanthropic works she was carrying out across the country.

“The Central Committee applauded the First Lady Amai Auxillia Mnangagwa and Angel of Hope for their immense contribution to the nation through charity and cultural programmes,” he said.

He said the Central Committee was briefed about efforts being made by Government in the economy and the agricultural sector by responsible Cabinet ministers.

“By invitation, the Central Committee received a report from Minister of Finance and Economic Development Professor Mthuli Ncube which was well received,” he said.

“It focussed on the state of the economy, since the advent of the Covid-19 pandemic highlighting the strategies that Government has adopted and implemented to keep the productive sectors of the economy alive, reduce inflation, boost exports ensuring financial stability through stabilising the foreign exchange rate and fiscal discipline,” said Cde Khaya Moyo.

He said the Minister of Lands, Agriculture, Fisheries, Water and Rural Resettlement Dr Anxious Masuka was also invited to brief the Central Committee on various agricultural activities that his Ministry was pursuing, including the Pfumvudza scheme.

“The Minister stated that the maize harvest for this farming season was estimated at between 2,5 million and 2,8 million tonnes, while the traditional grains were estimated at 350 000 tonnes to 500 000 tonnes,” said Cde Khaya Moyo.

“The Central Committee applauded the Minister for the measures put in place so far to promote farmers. The party was also informed about the President Rural Horticultural Scheme to spearhead rural agro-industry.

Cde Khaya Moyo said the Central Committee recommended a cautious approach for people during the forthcoming Easter Holiday to avoid another spike in Covid-19 cases.

This was after chairperson of the Covid-19 Inter-ministerial Taskforce Cde Oppah Muchinguri had briefed the Central Committee on progress in fighting the disease.