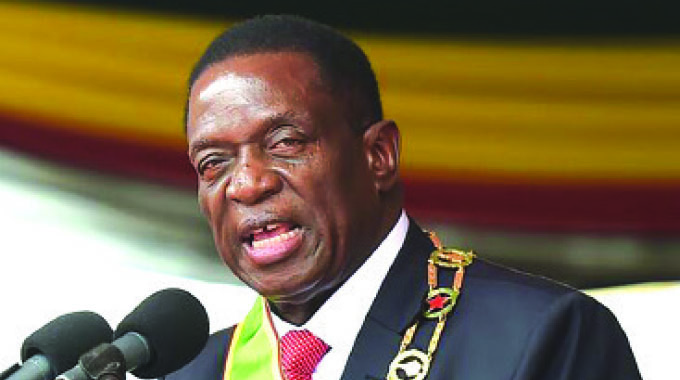 PRESIDENT Mnangagwa sees the Second Republic policy of engagement and re-engagement bearing fruit with Zimbabwe and many friendly countries across the globe sharing durable historic relations anchored on the common values, ideals, and commitment to defending sovereignty, prosperity, counter inequality, and nurture the people-to-people relations that embolden future generations.

In a wide ranging interview with our sister paper The Sunday Mail on the eve of the country’s 41st anniversary, President Mnangagwa indicated that the foreign policy his administration adopted, that of engagement and re-engagement, was predicated on building friendship with the rest of the countries of the international community.

“We are friendly to all, except those who may not accept us, but still we say to them there is no need for such hostility or imposition of sanctions. We would want to be friends to all.”

“Our policy of engagement and re-engagement is bearing fruit. To date, the relations between Zimbabwe and the EU have drastically improved. Most of the sanctions and measures imposed by the EU have been removed and we have begun dialogue and cooperation both at political level and on trade and economic cooperation with several countries of the EU.”

The President indicated that countries like France, Germany, Belgium, Italy and Spain, have also come on board for discussions and cooperation since the onset of the Second Republic.

“Of course, we still have countries like the United Kingdom and the United States who still continue to insist on the imposition of these sanctions,” he said.

Meanwhile, the US congratulated Zimbabwe on the celebration of its national day, expressing warm wishes for a successful and prosperous future.

“Congratulations to the people of Zimbabwe on 41 years of independence,” said the US Embassy on its Twitter handle.

“The United States supports the Zimbabwean people’s aspirations for a peaceful, democratic, and prosperous future. The US Embassy in Zimbabwe promotes active engagement and partnership with Zimbabweans to build a better future.”

World leaders among them Russian President Vladimir Putin have sent a congratulatory message to President Mnangagwa on the occasion of Zimbabwe’s 41st Independence anniversary. President Putin pledged to continue fostering economic and political cooperation between the two countries.

In his congratulatory message, Cuban President Miguel Diaz Canel through a statement released by the Cuban Ambassador to Zimbabwe, Carnelian Rodriguez, hailed Zimbabwe for demonstrating resilience in overcoming its challenges since attaining Independence.

Zimbabwe commemorated its 41st Independence Day anniversary yesterday under the theme “ZIM@41 Together Growing our Economy for a Prosperous, Resilient and Inclusive Society”.