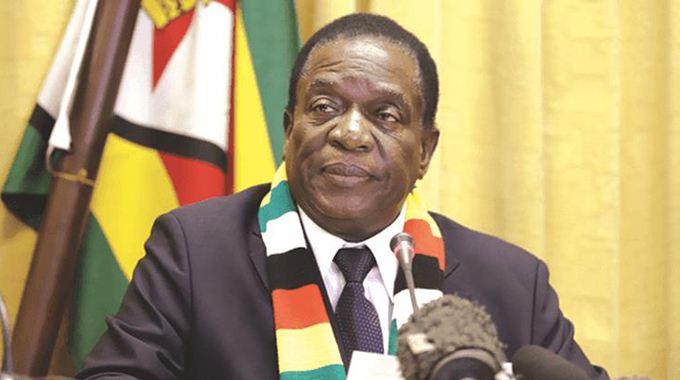 Herald Reporter
PRESIDENT Mnangagwa yesterday paid tribute to former Tanzanian President Benjamin Mkapa who died on Thursday at a hospital in the country’s capital city of Dar es Salaam after a short illness at the age of 81.

In a letter to his Tanzanian counterpart President John Magufuli, the President saluted the late Cde Mkapa for his peace-building efforts not only in the East African region, but across the continent.

The late Cde Mkapa served as Tanzanian President from 1995 to 2005.

Born on November 12 1938, Cde Mkapa became Tanzania’s president in 1995 and served until 2005 before handing over to Jakaya Mrisho Kikwete.

Upon his retirement, Cde Mkapa was part of various peace missions across the continent, including the mediation team that helped resolve Kenya’s post-election conflict in 2008.

“Our prayers are with the Mkapa family and the people of the United Republic of Tanzania during this period of mourning. We hope that the nation will find solace in the legacy that the late former President leaves behind him, including his immense contribution to the achievement of peace, stability and economic development of the United Republic of Tanzania, the East African Community, the Southern African Development Community, and indeed the whole African continent,” the President said.

Cde Magufuli early yesterday announced the death of the former Head of State after a short illness, which forced him to be admitted at a Dar es Salaam hospital.

In a statement, Zanu PF acting secretary for Information and Publicity and party spokesperson Cde Patrick Chinamasa said the former president was one of greatest and most loyal sons of Africa.

“Zanu PF is no stranger to the late Cde Mkapa, who led Tanzania’s revolutionary party at a crucial time after the transformation of SADCC into SADC. The people of Zimbabwe are indebted to the late President Mkapa as one of the resolute and candid Pan-Africanists who stood with our nation in calling for the unconditional removal of illegal sanctions imposed on our people.

“We remember Cde Mkapa as a firebrand African statesman, who during his time as President of Tanzania championed the cause for peace, unity and oneness for the African people in the face of neo-colonialism. Zanu PF salutes the late President Mkapa as a gallant champion of peace, unity and stability to which he committed himself after his presidency,” he said.

Cde Chinamasa said Cde Mkapa worked for the cause of peace in many African states where he was instrumental in conflict resolution.

“Most importantly, Zanu PF remembers the late President Mkapa as a leader who worked tirelessly to consolidate and grow relations among revolutionary parties in the region. May his soul rest in eternal peace,” he said.

Several African leaders yesterday sent their condolences to the people of Tanzania as they remembered a continental giant who helped nurture peace on the continent.

“It is with deep sadness that I learnt of the passing of Mzee Benjamin Mkapa, former President of Tanzania. A statesman particularly remembered as an indefatigable peacemaker in the East African region. My thoughts and prayers go out to his family, the people and the government of Tanzania.”