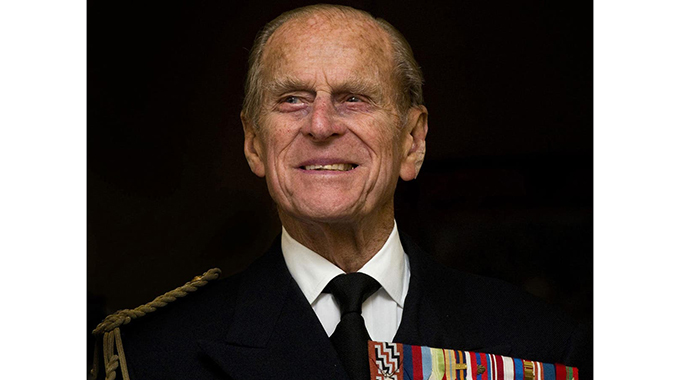 PRESIDENT Mnangagwa yesterday sent his condolences to the British Royal Family following the death of Prince Philip — reigning monarchy Queen Elizabeth’s husband — who died aged 99 and to families of nine accident victims who perished in a car crash in Manicaland province on Tuesday.

Prince Philip, who was the longest serving consort in British history, and was only months away from his 100th birthday in June, passed away at the British Royal Family palace — the Windsor Castle.

Tributes have been pouring from around the world on the death of Prince Philip and yesterday President Mnangagwa joined other heads of States and government in mourning the passing on of the Duke of Edinburgh.

“It is with deep sadness that I learnt of the passing on of His Royal Highness, Prince Philip, Duke of Edinburgh, on April 9, 2021. On behalf of the Government and people of Zimbabwe and indeed on my behalf, I extend my heartfelt condolences to you, Your Majesty, to your Family, as well as to the people of the United Kingdom of Great Britain and Northern Ireland,” he said.

“The people of Zimbabwe have very fond memories of Your Majesty’s visit with Prince Philip on the occasion of Commonwealth Heads of Government Meeting (CHOGM) 1991, which led to the historic adoption of Harare Declaration.

“Our thoughts and prayers are with you. May his soul rest in eternal peace. Please accept, Your Majesty, the assurances of my highest consideration.”

A statement from the British Royal Family said, “It is with deep sorrow that Her Majesty the Queen announces the death of her beloved husband, His Royal Highness the Prince Philip, Duke of Edinburgh. His Royal Highness passed away peacefully this morning at Windsor Castle. Further announcements will be made in due course. The Royal Family joins with people around the world in mourning his loss.”

Under President Mnangagwa, the Second Republic has been reaching out to all nations in an engagement and re-engagement drive that has seen relations with global partners improving significantly.

Back home, the President appealed to motorists and road users to exercise extreme caution all the time in order to avoid loss of life through accidents.

“The death on Tuesday afternoon of nine people in a horrific road accident which occurred along the highway between Rusape and Mutare came as a great shock to me.

“This road tragedy overshadowed what had passed as a relatively peaceful Easter holiday for our nation,” said the President in a statement.

“I was deeply saddened to learn that most of the victims of this accident were members of the Zimbabwe National Liberation War Collaborators Association (ZILIWACO) who were on their way to Mutare for a scheduled meeting by their association.

“Our country cannot afford to lose precious lives needlessly through road accidents the majority of which are attributable to human error. Life is sacrosanct and every one of us has a duty to respect and safeguard it.

“On behalf of the party, Zanu PF, Government, and indeed on my behalf, I wish to express my heartfelt condolences to the bereaved families and to members of ZILIWACO on this sad loss.

“In the same breath, we offer our prayers for the speedy recovery of all those who sustained injuries from this unfortunate mishap. May the souls of the dear departed rest in eternal peace,” said the President.

The accident came a day after the end of the Easter holidays and was the most fatal crash in the past week.

This year’s public holidays had higher road accident fatalities compared to last year, mainly caused by people to heed the calls for lockdowns