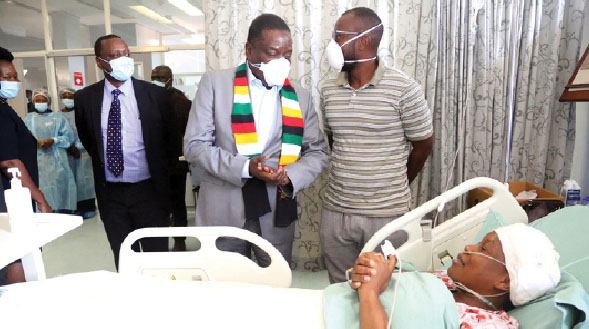 PRESIDENT Mnangagwa yesterday sent a condolence message to the family of Mr Albert Vunganai, a close aide to the First Lady Amai Auxillia Mnangagwa, who died from injuries sustained in a car accident in Mt Darwin on Friday.

Three other security officers were injured in the accident and are in hospital.

In a statement, the President described Mr Vunganai as an exemplary security and intelligence officer.

“It was with great shock and deep grief that my wife and I received yesterday the tragic news of the untimely death of Mr Albert Tonderai Vunganai, principal security officer, following a car accident in Mavhuradonha, Mt Darwin district, Mashonaland Central Province,” said the President.

He said Mr Vunganai’s death pained them (President and First Lady) the most considering that the accident happened in the course of duty.

“The late Vunganai was known very well to both of us, the First Lady and myself, having worked with him since 2014 when he joined my staff as a member of the close security unit during my tenure as Vice-President of the Republic of Zimbabwe before he was reassigned to the First Lady’s close security unit in 2017, where he worked until his untimely death yesterday (Friday).”

The President said the late Vunganai discharged his duties with professionalism and was a team player.

“Vunganai was a very good and exemplary security and intelligence officer, who discharged his duties with absolute loyalty and dedication, which are the hallmark of a professional cadre.

“His untimely departure, therefore, leaves a deep void among his colleagues which will be difficult to fill as he was such a good team player. On behalf of Government, my wife, and indeed on my own behalf, I wish to express our sincere condolences to the Vunganai family, especially his wife Nancy and the children, during this dark hour of grief,” said the President.

“May they take comfort from the knowledge that we grieve with them, as their loss is ours together.”

“I have come to see my officers who were involved in an accident yesterday. It is good they know I have compassion towards them, so I visited them,” he said after the visit.

“They are in capable hands and I’m assured everything possible is being done and I wish they have quick recovery.”