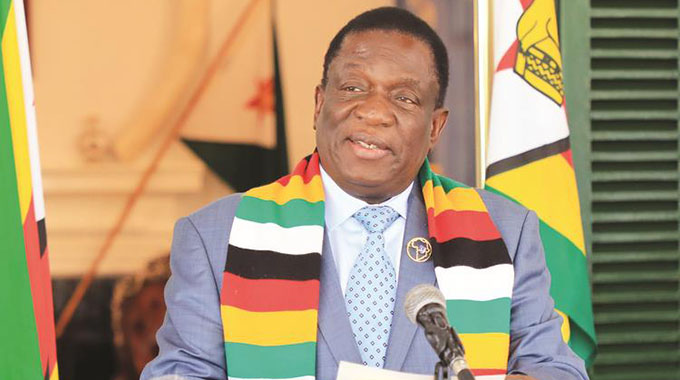 The country’s focus in 2020 should be on increased productivity, economic growth and job creation for the betterment of people’s livelihoods, President Mnangagwa has said.

In his New Year message delivered at State House yesterday, the President said the country experienced several challenges such as destruction and deaths brought by Cyclone Idai and drought, but thanked Zimbabweans for their unity in facing the challenges.

“We endured as a nation and rode the storm against all odds,” he said.

“Painful as it is often the case, we must persevere through this rough, but necessary patch on the road to growth and prosperity.

“Going forward, 2020 will be the year of higher productivity, economic growth, job creation and satisfying the needs of the people.

We cannot live in the past, we can only learn from it.

We must craft a future, benefiting from the wisdom of the past.”

President Mnangagwa said Government would continue with policies to protect vulnerable groups in both rural and urban areas.

Focus would be on the provision of affordable transport, maize-meal and other basic commodities, as well as healthcare, he said.

The welfare of public sector workers would also continue to qualitatively improve.

“The fiscal discipline we have instilled under the Second Republic saw us rein in the Budget deficit,” said President Mnangagwa.

“The new trend of Budget surpluses will continue and resources there-from used to finance more public services such as healthcare facilities, schools, roads and related projects with a direct impact on the people’s well-being.”

President Mnangagwa said Government had increased the budget for the programme from $720 million in 2019 to $3 billion this year and urged communities to come up with development projects for their areas.

“The onus is now on the various communities to accelerate the formulation and implementation of high impact projects which transform lives of our people,” he said.

“We must all ensure that our ongoing development drive leaves no one behind.

Let us all play a part.

“In this new spirit of devolution, unity and national cohesion espoused by the Second Republic we will, in 2020 and the years to follow, be holding our main National Independence Day commemorations in various parts of the country, away from our capital city, Harare. Our Independence and freedom is for us all.”

The President urged Zimbabweans to shun violence in the year ahead, saying those that instigated it should be exposed and condemned.

“Let us declare that never again shall we lose the precious lives of our fellow countrymen, women and children, for the political or monetary expediency of a few,” he said.

“The prosperity we so desire will be achieved only if we keep moving in unity and with purpose.”

President Mnangagwa thanked Zimbabweans for the unity and patriotism they exhibited last year.

“Over the year, we have continuously displayed patriotism and concern for the welfare and well-being of each other,” he said.

“Indeed, our strength lies in the unity and love for one another. Our faith, goodness, perseverance and ability to rise above any difficulties as Zimbabweans, has brought us thus far.”

President Mnangagwa said there would be no going back on the local currency, adding that Government would continue implementing economic and political reforms for the good of the country’s citizens.

“Meanwhile, our currency, the Zimbabwe dollar introduced during the last quarter of the year, must speedily take root,” he said.

“There is no going back on mono currency.

Let us individually and collectively defend and protect it as our symbol of national pride and sovereignty.

“The journey to entrench the democratic culture we have begun will be accelerated.

This is right, just and for the good of our people.

“Hence, the realignment of our laws to the Constitution must be completed.

“As your listening President and a servant leader, I will continue engaging with you and listening to your concerns so that we walk hand-in-hand together in unity, love, peace and harmony towards a prosperous Zimbabwe.”