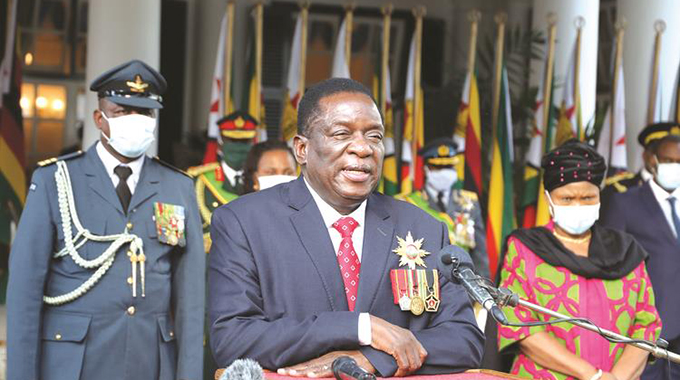 Herald Reporter
Zimbabweans must continue to look at building a prosperous and free Zimbabwe and accelerating economic growth as the country celebrates the 40th anniversary of independence today, President Mnangagwa stressed in his address to mark the day.

Looking beyond the Covid-19 pandemic and the temporary measures needed to contain it, the President returned to the themes that have marked his term of office: the Vision 2030 that sees Zimbabwe reaching middle income status within the next decade, the need for unity, investment and production, the need for all to work together effectively, the need for all parts of Zimbabwe to move forward together and for everyone to contribute to  national growth and to benefit from that growth.

This year’s Independence Day celebrations are home-based during the lockdown, with the mass gatherings across the country cancelled, but the President, stressed that physical separation did not stop the people being united as a nation in spirit.

“Forty years after independence, let us remain hopeful and steadfast in our spirits. Vision 2030 is alive and beyond Covid-19. Its accomplishment must be accelerated.

“Our present experiences, in the wake of this pandemic, teach us that friends and investors may assist us. However, it is the collective efforts of all our nationals across all sectors, that will make the difference. We must, thus scale up dialogue among each other to harness our abilities, competencies, skills and resources.”

The President called on the nation to reminisce on the sacrifices made by the gallant sons and daughters of the soil to ensure that Zimbabweans could be masters of their own destiny in freedom but this was the starting point.

“May our children and grandchildren always enjoy freedom while defending their rich cultural heritage and working hard, in unity, for an ever prosperous future,” President Mnangagwa said.

Linking the struggle for freedom with the present struggle to overcome Covid-19 and the struggle to achieve national prosperity, he said: “Although we are physically separated, we are united in spirit. The time to celebrate together shall come. For our founding fathers and gallant heroes and heroines, the patriotic thing to do was to fight for our freedom. Today, our task, in relation to Covid-19, is to stay at home, keep our distance and wash our hands.

“In addition we must produce, produce and produce. That way, we celebrate our independence by saving lives and our economy,” he said.

He then turned to the national needs and what his Government was doing to meet these.

“Achieving food security remains a key priority to my Government. Today our stocks are being replenished through massive food imports. Food will reach vulnerable households so that no one will starve. This includes those in urban areas.

“Orphans and the vulnerable continue to benefit from the Basic Education Assistance Module with a total of 1,2 million children expected to be on the scheme this year,” President Mnangagwa said.

But Zimbabwe’s ability to resolve its challenges continued to be weighed down by the continued existence of the illegal sanctions and he called for their lifting without preconditions.

Land reform was irreversible and was an important part of the country’s independence and sovereignty. “The land shall forever remain united with the people and the people to their land. To this, there is no wavering or going back. However, we shall not shy away from fine-tuning our strategies to enhance land utilisation, equitable access and productivity,” the President said.

More than $500 million had been set aside to enhance agricultural productivity through rehabilitation and expansion of irrigation facilities and thanked farmers that have continued to produce for the nation. Government would continue with the Presidential Input Support Scheme and other smart agriculture policies to enhance productivity.

The President said Government would support manufacturing processes developed as a part of the defence against Covid-19. “It is the expectation that buoyant industries that meet our needs, while serving regional, international, continental and even global demand will emerge henceforth.

“Scientific research, development, innovation and technologies for the vast economic spectrum towards value addition will be encouraged. Let us strive to be a knowledge building and knowledge driven society by turning our literacy levels to real goods and services for our people and beyond,” President Mnangagwa said.

underway and those in the pipeline gave hope that the target of a US$12 billion a year mining industry would be achieved by 2030.

In the energy sector, he acknowledged the improved inflows into Lake Kariba and the construction of Hwange units 7 and 8, expected to be ready next year, saying this would improve electricity supply onto the national grid.

“In respect of our social service sector, Government is engaging all stakeholders to facilitate the modernisation of the sector. In this regard, local authorities must shift focus from their traditional political roles to being engines of economic development and transformation. Our rural sector has proved a refuge and fortress in times of national and global crisis. Government will move with greater speed to relook at and implement our rural development policy.

“The need for suitable housing, sanitation, energy, along with accessible water, ICT and social amenities in rural areas should not be placed on the back burner of our national development agenda.”

The District Development Fund would continue to receive support and he wanted modernisation of towns and cities and improvement of the country’s road network.

The informalisation of a large part of the economy meant the Government would implement multi-pronged initiatives to assist start-up businesses and small and medium scale enterprises, especially those run by women and youths, to upgrade these sectors.

President Mnangagwa reiterated that reconciliation remained the foundation of national unity and the re-engagement and engagement policy remained a cornerstone of the country’s international relations.

“The country’s diplomatic missions have refocused towards economic diplomacy, through the promotion of trade and investment, for win-win partnerships. Although our country has been a victim of unjustified illegal economic sanctions and other hostile measures, we continue to reach out for unqualified friendship.”

Zimbabwe remained an active member of regional and international bodies like the Sadc, AU and the UN.

He said the country’s reform agenda was to make the country investor-friendly through adoption of global best practices. Such reforms include the creation of the Zimbabwe Development Agency, a one-stop shop meant to simplify setting up businesses.

The President reiterated his call for peace and unity in the country to enhance development.

“As we begin this important ‘Decade for Action’, may we never lose focus of the bigger vision, to develop and modernise Zimbabwe towards an upper middle income economy by 2030,” President Mnangagwa said.

Newer Post
At 40, Zimbabwe still scarred by past atrocities
Older Post
I’m grateful to have been born and bred in Rhodesia