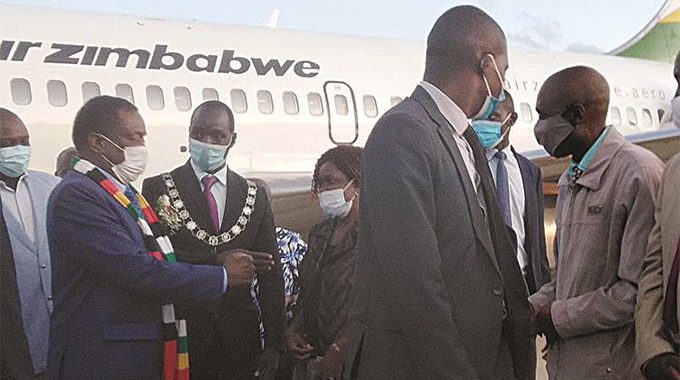 Leonard Ncube in VICTORIA FALLS
Victoria Falls has now been proclaimed a city with the formal colourful ceremony of conferment of the new status being presided over by President Mnangagwa today.

The proclamation, made in terms of the Urban Councils Act, grants the application made to the Minister of Local Government and Public Works for the new status and makes it clear the required conditions set out in the Act have been complied with.

“Whereas in terms of Section 141 of the Urban Councils Act it is provided that a growth point, unincorporated urban area, local board or council may apply to the minister in the form and manner prescribed for a change of its status. Whereas by section 14(2) of the said Act, the minister took necessary steps under the Act to effect the changes applied for and whereas Section 5 and 6 of the said Act have been complied with, and I consider it desirable to make this proclamation, now therefore under and by virtue of powers vested in the President, I do by this my proclamation alter the name Victoria Falls Municipality to Victoria Falls City and assign the name Victoria Falls to the City Council,” read the proclamation.

Although Victoria Falls was already a municipality, and city status does not give extra powers to the local authority, a second statutory instrument also gazetted on Monday makes it clear that all by-laws, regulations, rules or orders of the municipality shall remain in force.

The local authority will present the President with the Freedom of the City for his contribution to the town’s growth into a city.

Freedom of the City is the highest honour bestowed by a council to a valuable member of the community or to a visiting dignitary. It will be the first such honour to be given to anyone in the history of the new city and the first for President Mnangagwa as Head of State.

The city status is a milestone and a prestigious achievement for Victoria Falls which becomes the first municipality to be upgraded by the Second Republic and first city in Matabeleland North. It cements the national role of Victoria Falls as the tourism and conference capital of Zimbabwe.

City fathers from Livingstone in Zambia, as well as from Kasane and Francistown in Botswana are also expected to attend the ceremony, highlighting the strong regional ties in the giant tourism belt of the area.

Proceedings will start at the council offices where President Mnangagwa will meet council officials before unveiling a remembrance plaque before events shift to the main venue.

Local Government and Public Works Minister July Moyo, who has been in Victoria Falls for the

past few days to oversee preparations for the day, said the new city was in an ecstatic mood.

“So tomorrow (today) and Thursday are big days for Victoria Falls and this comes after the President came here to officially open some hotels. The council will also showcase a number of other upcoming hotels in its jurisdiction.”

“The new city has prepared very well. They are graduating from municipality to city and the morale is very high. Also the euphoria about the President coming to Victoria Falls to receive the Freedom of the City and also confer the city status is very important.

“There will be a plaque to tell the President’s life story and how he was freed at the Victoria Falls Bridge,” said Minister Moyo.

He said the Zimbabwe Local Government Association (Zilga) conference will take place tomorrow at the same venue, and besides the usual agenda, all women councillors from across the country will have an opportunity to speak to the President about their challenges and make proposals on how they want their issues addressed.

With the city status, Victoria Falls will assume prestige that is reserved for cities and now compete with other tourism destinations globally. This will also make the tourism town a well sought after investment destination, with potential for more twinning relationships with other cities around the world.

Government wants to make Victoria Falls its conferencing capital and plans to build a multi-purpose convention centre with top-notch facilities such as five-star hotels, medical centre, a university, a Zimbabwe Defence Forces camp and sporting facilities.

Victoria Falls was designated a Special Economic Zone with special focus on tourism and Government recently launched the Victoria Falls Stock Exchange (VFEX) which is also expected to lure investors.