The MDC National Council met today and debated extensively on the election held on 31 July 2013. 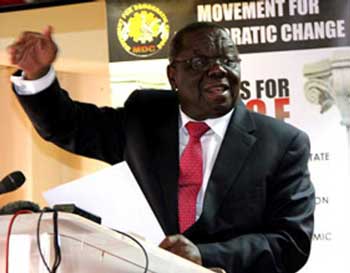 1. The MDC totally rejects the 31 July elections on the basis of the process the absence of reforms

2. From the evidence available, discounting all omissions and commissions the MDC won that election

3. The MDC thanks and acknowledges the AU and SADC missions in this regard at their request will submit a dossier of all the irregularities and illegalities

5. The MDC calls for a forensic audit of the electoral process in particular the voters roll, the ballot papers and where they were printed, the special vote, voter displacement, voter registration certificates

6. Further, the MDC national council resolved that the SADC Organ Troika must investigate the role of the security sector and the militarization of the election

7. The MDC national council noted with great concern the frog-marching and captivity and oppression of the rural population through the abuse of traditional leaders and the high incidents of assisted voters

8. Given the illegality of this election, the MDC national council resolved that it will not legitimize institutions created by an illegal election and therefore will not engage in institutions of government

9. The MDC is determined to pursue peaceful, legal, political,  constitutional and diplomatic remedies  to resolve the current crisis

10. The MDC national council resolved that once all remedies have been exhausted, the people of Zimbabwe should be allowed a fresh opportunity to freely and fairly elect a government of their choice. In this regard, a credible, free, fair and legitimate election must be held as soon as possible

via President Tsvangirai’s statement to the press after the MDC national council meeting, Harare, 3 August 2013.