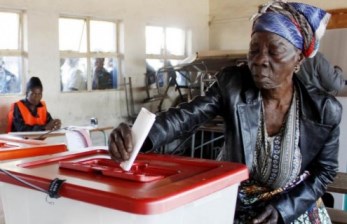 HARARE – Tomorrow’s presidential election will be a tightly contested affair which will most likely not bring out an outright winner, analysts predicted yesterday.

While the main presidential race will be between Zanu PF’s candidate President Emmerson Mnangagwa and MDC Alliance’s Nelson Chamisa, analysts said the vote can be seen as a referendum on Zanu PF leader, who has been in office since the November de facto coup that ousted long-ruling Robert Mugabe.

Political analyst Maxwell Saungweme said this is a tight contest.

“If it was free and fair, Chamisa would get around 55 to 60 percent. But as I have said before, this election is far from being free and fair.

“The main foundation of its lack of freeness and fairness is not Zanu PF, Zec (Zimbabwe Electoral Commission) or (Zec chairperson Priscilla) Chigumba. But the MDC and Zanu PF who connived to draft the current Constitution via a political parties-driven process as opposed to people-driven process.

“So the irregularities were born out of the undemocratic Constitution born out of a marriage of MDC and Zanu PF,” said Saungweme.

He said Chigumba and Zec were appointed through a parliamentary process involving Chamisa and MDC, a process which complied with the undemocratic Constitution they created with Zanu PF.

“But this outcome is an outcome from a rigged poll, rigged by the Constitution created by MDC and Zanu PF. So the process will give Mnangagwa 53 to 56 percent, Chamisa 44 to 46 percent and others one to two percent.”

Political analyst McDonald Lewanika said based on recent polls, it is plausible that a sizable number of the 20 percent of undecided voters will break in Chamisa’s favour.

“If we work out this at a modest two thirds, that would see Chamisa possibly getting nine percent added to his 37 to make it about 46 percent of the vote.

“If the rest break for Mnangagwa about five percent, this would bring his acute share to about 45 percent, keeping them tied with the rest of the vote going to other candidates,” predicted Lewanika.

He said that bar voter inflation and deflation, “I think the main candidates are almost equally poised, going into the Monday election and a runoff election is not inconceivable, and is actually more likely than not.”

Media analyst Rashweat Mukundu is of the opinion that Zimbabwe is headed for a runoff, with Chamisa getting around 45 percent with ED around 40 percent.

“I think the 20 percent undecided will likely be split among the two, with Chamisa being the major beneficiary.

“Zanu PF supporters historically state their party affiliation while opposition MDC supporters are more circumspect for fear of violence and the two, Mnangagwa and Chamisa are in a dead heat run to the line, but we should expect a runoff,” said Mukundu.

Crisis in Zimbabwe Coalition spokesperson Tabani Moyo said: “If the Afrobarometer statistics are anything to go by, which were compiled a month ago, then by now, Chamisa has eclipsed Mnangagwa.

“Barring many factors, one will say, as outlined in the Afrobarometer report, rejuvenated politics and interest from the young voters will count, but as typical of the shenanigans of the ruling party, there must be separation of what happens in reality and the oiled rigging machinery which Zanu PF is much in control.”

Arts practitioner Chiko Chazunguza said: “My prediction is 60-40 in favour of Mnangagwa. While people may love Chamisa, I believe they still see that there is something missing in him, something which Mnangagwa has and that’s maturity. It’s now beyond the parties, it’s more of personality traits really.”

Actor and playwright Silvanos Mudzvova said: “I am seeing a 53 percent to Mnangagwa and 45 percent to Chamisa. Zanu PF is not panicking and I am so worried by this.

“Zanu PF did a head count in rural areas and they know who is voting for them and who is not. Yes, Chamisa has made inroads in some rural constituencies but not enough to remove Zanu PF.

“The removal of Robert Mugabe from Zanu PF has resulted in less than 10 percent of voters leaving the party. I personally feel the opposition did not utilise this Zanu PF split.”

Political analyst Vivid Gwede said indications are that Mnangagwa will not only manage a majority vote, but will probably lose the first round of voting.

“If surveys are anything to go by, he will not go beyond 43 percent while the Chamisa will likely get the higher percentage or cross the ultimate line.

“Given that 20 percent of respondents in the latest Afrobarometer survey did not reveal their voting preferences, this has contextual implications in Zimbabwe where opposition voters are the one likely to prefer hiding their preference because of previous victimisation.

“This makes it easily conceivable that Chamisa will get the largest chunk of these, beyond the 37 percent attributed to him, with very few others being merely undecided voters.

“But even looking at the political environment, people are simply tired of the current government.

“There is unemployment, cash crisis, palpable tedium and widespread poverty from years of bad governance attributed to Zanu PF’s policies over the past 38 years,” said Gwede.

He said since November 2017, Mnangagwa’s administration has done little to turn around the fortunes of the ordinary person in Zimbabwe.

“This is therefore a protest election and the spirit of dissent is prevalent in people’s conversations about the country’s direction.

After Mugabe’s departure, there is still clamouring for real change in the elections due on Monday in Zimbabwe.”

Media practitioner Nigel Nyamutumbu said: “I am persuaded to agree with the Afrobarometer report, which predicts a very tight race between Mnangagwa and Chamisa.

“Having said that, it is prudent to note that the electoral process was not entirely credible, with the obtaining environment disadvantaging Chamisa.

“Given the circumstances, at best Chamisa can amass enough votes to warrant a run-off, otherwise it’s looking likely that the election is tailored for a straight Mnangagwa victory.”

Election Resource Centre director Tawanda Chimhini said his organisation is not in a position to share permutations with regards to which way the election results will go but based on an analysis of the electoral process, regardless of who wins, the credibility of the 2018 election will be disputed.

“It is unfortunate that opportunities were missed since 2013 to enhance credibility, freeness and fairness of this election through ignoring calls to fully align the Electoral Act with the Constitution, to strengthen institutions supporting democracy by entrenching their independence and promoting transparent and accountable conduct and create a secure political environment for citizens to exercise their democratic rights.

“The morning after this election, all stakeholders must consider seriously efforts aimed at moving our elections from being a five yearly costly charade to an acceptable democratic process that contributes to the development of the country,” said Chimhini.