Presidential Guard soldier up for theft of $50k items from Mugabe 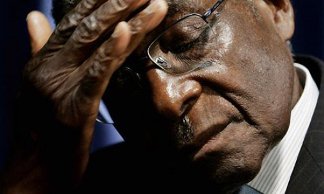 HARARE – Deposed Zimbabwe leader Robert Mugabe has dragged a presidential guard soldier to court for allegedly stealing $50 000 worth of his property from Zimbabwe House, a court heard.

He instead claimed Mugabe had given him the laptops and computer accessories as a token of appreciation for good service during his tenure as president.

He dared the nonagenarian to come and testify in court to substantiate his claims.

Sande remanded him in custody to April 25.

He will have to approach the High Court for bail.

According to State papers, the complainant is Mugabe represented by Wonder Enock Nyamurima, 52, a provincial intelligence officer in the President’s Department.

Prosecutor Fransisca Mukumbiri alleged that sometime in March, Zimbabwe House was to undergo renovations. In the State residence was Mugabe’s household goods including a printer, computers and accessories.

The court heard that Nyamurima was instructed to transfer the goods from Zimbabwe House to Polloground where five shipping containers had been put to secure the goods in custody.

The goods were transferred and secured in the containers.

On April 3, Zvakavapano and his accomplice Marega were deployed at the five containers location to do perimeter guard duties.

It was alleged that property was moved over a precast wall. The court heard Zvakavapano and Marega were disturbed by other soldiers on patrol and dumped four boxed laptops, a printer and an empty box of a Xerox printer and disappeared in the night. Zvakavapano and Marega allegedly returned to take the property from their hide-out point and reportedly shared the spoils.

The court heard that Zvakavapano sold the stolen items at giveaway prices in town.

On April 10, detectives came across one of the stolen Inspur laptops in shop 11 at Nhaka Parade in Harare.

It was established that it had been sold at $199 to Elton Chasekela from Voster Chigede of Chitungwiza.

It was alleged that Chigede led detectives to Tawanda Edson Musekiwa, who then assisted in the arrest of Zvakavapano after revealing that he was the one who sold the laptops.

Zvakavapano was arrested. His arrest led to the recovery of some of the laptops, computers and accessories at his residence, the court heard.