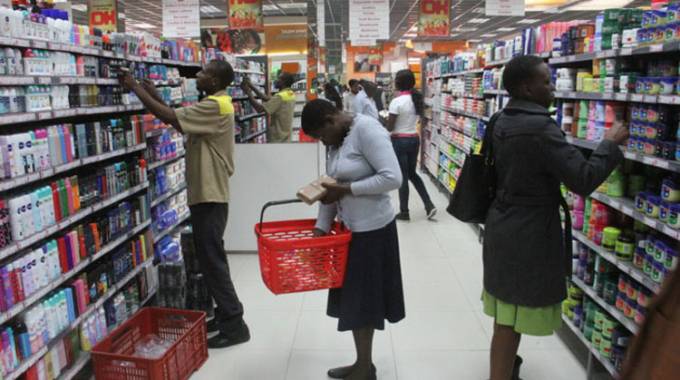 The Consumer Council of Zimbabwe (CCZ) recently flagged businesses for profiteering and squeezing incomes of vulnerable consumers. A latest CCZ survey indicates that the food basket for a family of six has since risen to $1 500 per month from $971.

However, the consumer watchdog believes there is need for dialogue between Government, business and labour to address the pricing madness.

Q: What is your general take on continued price hikes on the local market?

A: We have been tracking it for quite some time now and I think at every turn we have alerted the public and policymakers about what is happening.

It becomes more evident now because it is something that is happening on a daily basis, but we can track it as far as 2017.

I think if you remember, around this time in 2017, that is when we had a social media scare that resulted in consumers’ panic-buying and prices going up, products disappearing from (supermarket) shelves. There were meetings on the issue between Government, manufacturers and producers that we participated in.

And, people have been meeting and talking about the same thing up until now.

We talk about lack of foreign currency, there is no money in the banks and then the three-tier pricing, black market and grey market. All those things have been going on for nearly three years now and we share the same things at those meetings.

The expectation to do something about this must never be pinned on us alone.

You might lean on manufacturers to reduce their prices, but if you are not dealing with the fundamental problem, it is going to happen again. In 2018, around this time again, the same thing happened and I think the strange thing about us is that we are allowing these things to happen all the time.

Now, the basket of currencies has been removed and we have a local currency that we are using, but everything is being rated at the US dollar rate on that particular day.

Look at fuel, we know for sure that every week we anticipate to see where the price is going to be. At the moment, it is about $15 (per litre) and everybody already is anticipating $17 (per litre).

For consumers, it becomes very strange.

You look at products in the supermarket, all of them are rated against the US dollar, and if it is being allowed to carry on and you are not rating your people’s salaries, the question we are asking is: how do you expect people to survive?

The 320 percent increase (in electricity tariffs) that is talked about by Zera, who is expected to pay that?

Industry can absorb that, but here we are talking about the people whose salaries are low.

We talk of civil servants who just got their salary increases and the lowest is said to get about $1 000. Now, if you go and do your grocery on that, you are so shocked and you question yourself how an ordinary Zimbabwean family is surviving, and that is our job.

We look at how the consumer is surviving.

We talk of austerity, we talk of all these policies that are put in place and they are supposedly put in place to stimulate business. Business for who?

Those are the basics.

We might find alternatives for everything else, but bread, mealie-meal, sugar, salt – those are the things Government must protect because they determine the survival of people.

Q: From your meetings would you say there is a genuine will to deal with the situation on the ground?

A: It will be quite strange if they did not appreciate what is happening. I mean we are not economists, but I think everybody knows the situation we are in. Everybody generally understands that manufacturers are not getting enough products to manufacture.

Look at our agriculture – put aside climate change, the poor harvests – we have always incessantly talked about the bodies of water that are available in Zimbabwe and they are not being utilised. We are not producing enough for our own purposes and, therefore, when there is not enough being produced, prices are horrendous.

There are a lot of good things that we talk about, we talk about Buying Zimbabwe – you know, all those kinds of things – but it never happens, so you are asking whether there is commitment.

Commitment means that you put into action things that we talk about and I do not see it happening fast enough.

Price hikes are partly being spurred by profiteering, could this be the time for price controls?

I think we always refer to the time when there were price controls and what happened. The response in Zimbabwe on some policies that are put in place are things that you do not usually expect.

You know the recent one, the ban on cash-in, cash-out (on electronic transactions), it seems like people always find ways taking advantage.

If you remember 2006, 2007, 2008, there were controls, quite big controls, everything went out of the shops, everything went to the black market, so there is always that fear. So, you always hear policymakers and even us saying that controlling is not tackling the root cause.

I think its common knowledge that there are people who are changing money, big monies on the black market, I think the question for an ordinary person is, why it is not being dealt with?

So, other questions are: what has happened to the Tripartite Negotiating Forum?

That is the platform we should be using to sort the differences that might be there.

Q: So how do we move on from now, what are the practical steps that we can take?

A: Let us produce first, let us get the money and get people to produce. We have land that is going begging; let us dig boreholes (and) irrigate if people are not going to use big water bodies.

The wheat we produce is only for three months and this means that the next six months of the year we are importing.

Why not use the US dollar that we use to import to actually produce.

Why are we not producing all other small grains?

Q: I understand there is a Consumer Protection Bill in the pipeline, what is the progress with that?

A: I do not want to think that it is an unattainable dream. But, last year we had the Parliament Portfolio Committee doing its consultations and we went around with them and this was a step forward.

Unfortunately, all of a sudden the Bill has become stuck.

The Bill will allow so many people to participate in consumer protection matters.

We are a very small organisation trying to do big things. But, our vision was that the law would come into being and free the space for people and other organisations, but we are nearly coming to the end of the year and it was delayed because we had elections.

We do not want to wait for the next elections just to say we cannot do it now, we have to wait for a new Parliament like we did last time.

If the Bill was to be passed, consumers would have the power to deal with some of the things that are happening and in it, you have the instrument of class action suits that can be used by consumers.

Q: Pensioners are in the vulnerable age groups and their premiums have been eroded by inflation. How can they be assisted?

A: That has to be dealt by Ipec (Insurance and Pension Commisson).

But, I have elderly parents: my dad just turned 86 a few days ago my mum is 82 and I know the pain they have gone through when their banks changed to the US dollars.

You know you are lucky if as a pensioner you have bought your own house, but if you have not, it means that your children will have to look after you.