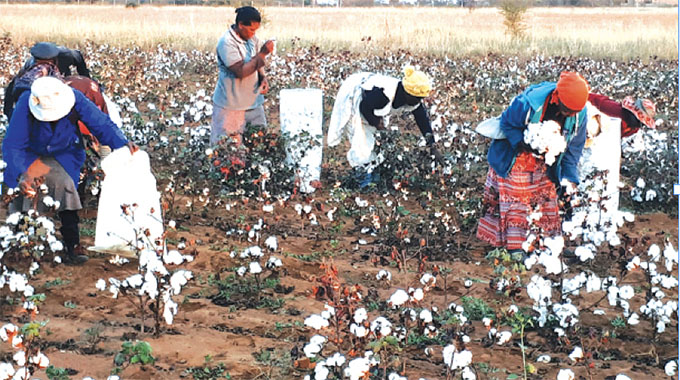 Zimbabwe’s cotton companies face “a very difficult situation” amid indications they may struggle to pay this year’s producer price for cotton,  pegged at  $85 per kilogramme (US$1,02), which many, particularly small ones, might not afford.

There are growing concerns that the price, which is way above global price of lint (fibre) could throw several merchants out of business if the exchange rate remains stable.

The cotton selling season normally begins in April and industry players do not see a major depreciation of the Zimbabwean dollar, given that the domestic currency has largely been stable for nearly six months now.

The bulk of Zimbabwe’s processed cotton is exported and prices are determined on the international markets.

At $85 per kg, the price comes to about US$1 per kg, at the current exchange rate, against revenue of about US$0,72c for both ginned seed and lint extracted from a kilogramme of raw cotton.

This may require the Government to provide a subsidy, some industry players suggested, warning of potential collapse of the cotton merchants in the absence of State intervention.

“We anticipate the foreign exchange rate to remain relatively stable and at $85 per kilo, I don’t think any merchant would afford to pay that,” said an official with CGA who declined to be identified.

“Also given that farmers are getting inputs for free, the total costs of producing a kg of seed cotton will come to around US$1,25. There is need to engage all stakeholders to avoid last year’s situation where companies failed to access facilities to buy the crop because no bank was prepared to finance losses.”

The Cotton Company of Zimbabwe finances about 85 percent of local production under the Presidential Free Inputs Scheme. The remainder is funded by private players

The Government has since promised to pay off outstanding amounts but this has not yet happened.

“At $85 per kg, I don’t think any company would afford to pay,” said a commodity analyst with a Harare-based local research company.

“A price of between US$0,35c and US$0,40 would make merchants viable so the Government will need to come up with a subsidy.”

Cotton, once one of the country’s largest foreign currency earners, had lost glitter as farmers shunned the crop due to lack of funding and poor prices offered by producers.

“As a result of inadequate levels of inputs and agronomic support by cotton merchants, which led to low yields, side-marketing and poor debt recovery in the past few years, the industry almost collapsed.

But following initiatives such as the Presidential Cotton Inputs and the export incentive schemes, production has been on the increase.