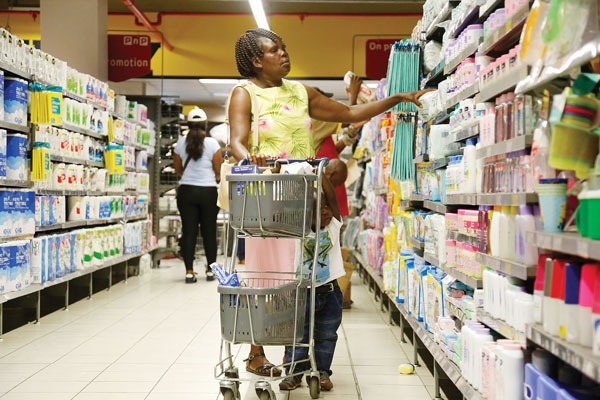 A woman shopping in a retail outlet in Harare yesterday. Prices of basic commodities shot up in most shops after Finance minister Mthuli Ncube on Monday announced plans to introduce a 2% tax on monetary transactions.

PRICES shot up by up to 10% yesterday, as suppliers and manufacturers reacted to the introduction of a 2% tax on money transfer transactions by new Finance minister, Mthuli Ncube in a move that could hit consumers hard as retailers warned of further price hikes.

“So, the citation was on the two cents per dollar tax and obviously, the parallel market rates also went up today (yesterday). This means that further price increases are likely if manufacturers, retailers and wholesalers do not get foreign currency allocations,” Mutashu said.

A snap survey showed that prices of some basic goods at a number of retail shops in Harare’s central business district, which include cooking oil, mealie meal, flour, washing powder and rice, had gone up.

“Some of the prices are slightly different from when I came here the previous day,” one TM Pick n Pay shopper who identified himself as Tony said.

Shortages of bread were also reported in retail outlets towards the end of business yesterday.

Rates on Zimbabwe’s black market rocketed after the announcement.

“The premium on the US dollar is currently at 130% and this is lucrative business for us,” a cash dealer, who did not identify himself, told the NewsDay.

Parallel market rates have been skyrocketing ever since Ncube opined that he planned to scrap the bond notes, which he said were a surrogate local currency, “but without the fundamentals to support it”.

On the Zimbabwe Stock Exchange, market turnover jumped over 1 000% to $4,36 million from $358 739,74 recorded on Monday as investors sought cover in company shares to preserve value of their money.

The market’s total valuation rose 6,53% to $13,24 billion from $12,43 billion the previous, while analysts said a bull run was likely if the uncertainty persisted.

“I think it is a knee-jerk reaction and I think people are still digesting what is coming out of the monetary policy and the fiscal measures. But, it is those initial moves that show that investors are seeing value preservation in the shares,” the Stockbrokers” Association of Zimbabwe vice-chairperson Arnold Dhlamini said.