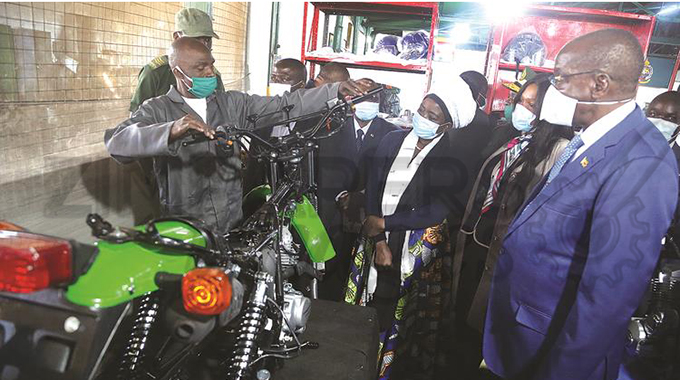 Tendai Mugabe Senior Reporter
Nothing can stop people from joining hands to develop the economy for the common good, Vice President Kembo Mohadi has said.

He said this after launching the Zimbabwe Prison and Correctional Services (ZPCS) motor cycle assembly project at Harare Central Prison in Harare yesterday.

The project is a joint venture initiative between Pamberi/Qhubekani Investments — a wholly ZPCS company and Gellos Motorcycles.

VP Mohadi said the project was not only good for ZPCS, but the nation at large and had the capacity to assemble 10 motorbikes a day subject to availability of adequate resources.

He said the motorbikes being assembled through the project would serve as an alternative mode of transport to meet both individual and organisational micro-transportation needs.

“There is nothing that can hinder us from joining forces in reviving our economy for the common good of the nation,” said VP Mohadi.

“As Zimbabweans, we have learnt that if we join hands collectively, we can move this country to greater heights as has been demonstrated by the Zimbabwe’s collective response to the Covid-19 pandemic.”

He said Zimbabweans showed the spirit of oneness during Cyclone Idai disaster.

VP Mohadi said the project spoke to President Mnangagwa’s mantra that “Zimbabwe is open for business” in furtherance of the attainment of Vision 2030 of an upper middle income economy.

He said there was room for more employment creation if the project was properly managed.

He said the ZPCS was also contributing towards the fight against Covid-19 by producing face masks in its workshops’ tailoring section.

He said the institution had the capacity to produce 28 000 face masks resources permitting.

Gellos Motorcycles founder Angelo Pereira said it was their vision to have operations in each of the country’s 10 provinces.

He said during the second and third stages of the project, they would focus on engineering services and construction of a showroom to showcase and sell their products.