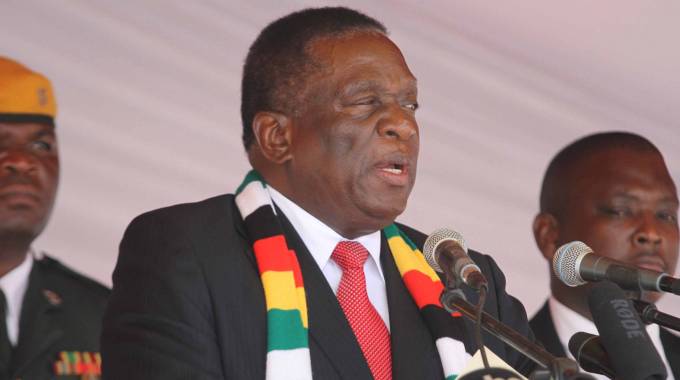 Maintenance of Peace and Order Act (MOPA), which has been signed by President Mnangagwa into law, is expected to open up democratic space by entrenching the right to demonstrate and present petitions, among other far-reaching freedoms that Government is determined to promote.

The Companies and Other Business Entities Act was also assented to by the President last week.

MOPA replaces the Public Order and Security Act (POSA), which the President previously described as symbol of the old Zimbabwe.

In a bid to entrench democratic values and freedoms in line with Vision 2030 of achieving an upper middle-income economy, President Mnangagwa’s leadership has implemented a raft of reforms designed to transform the political and economic environment.

The Head of State and Government told people who attended the anti-sanctions rally in Mahusekwa yesterday of the new milestone.

“We now have a new law. We have removed POSA and it has been replaced by what we call MOPA. I signed MOPA into law just last week,” the President said.

In addition to granting the right to protest, the new law also regularises the way the military is deployed to assist the police in maintaining law and order.

Experts believe the signing of MOPA by the President is a key milestone in the opening up of robust re-engagement with countries that viewed the law as somewhat draconian and out of sync with the opening up of democratic space in the New Dispensation.

Besides opening and deepening diplomatic engagement, the experts say MOPA will be in sync with provisions contained in the new Constitution that include the elargment of civil liberties to citizens.

“It combines the private business corporations and companies into one. It also introduces electronic registration and transactions. This was not present in the old Bill, now we can do electronic transactions from wherever we are, even company registrations or any other company transactions,” she said.

“There is also a provision of mergers and takeovers, something that was not provided for in the old Bill. Above all, in line with our ease of doing business reforms, the new Act replaces criminal liabilities with civil penalties. You find that we have substituted wherever we had criminal penalties with civil penalties that are implemented through the office of Chief Registrar of Companies.”

She said the new Act also compels directors to be more transparent and disclose any issues to do with conflict of interest.

Mrs Mabiza added: “It also provided for re-registration of companies. This is important in that there is going to be a grace period in which companies are going to be re-registered and this will be coordinated through our companies’ office.

“We are in the process of finalising regulations for implementation of the Act.”