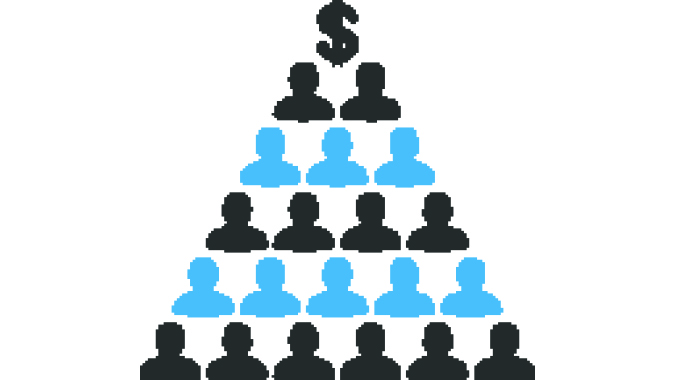 Fairness Moyana in Hwange
THE Hwange pyramid schemes saga has taken a new twist as residents who were duped by different money-spinning pyramid schemes which have since collapsed have approached the courts in an effort to recover their money.

Hwange residents are reported to have lost thousands of dollars to pyramid schemes that were set up under the guise of cushioning them against the economic effects brought by the Covid-19 induced national lockdowns. Under the various schemes, residents were promised overnight riches upon contributing a joining fee ranging from US$10 to US$50.

Further, every member was required to recruit two people who would also make a similar contribution. After a week a certain number of the membership would “get paid their round”, with members promised atleast US$250.

However, the schemes began to collapse with panic and chaos sweeping through the mining town’s suburbs following a recent incident in which a pioneer scheme involving nuns from the Roman Catholic Church collapsed resulting in hundreds of angry residents besieging the church to demand their money. Police had to be called to disperse the emotionally charged crowd who were threatening to beat up the nuns.

A police report was eventually filed but both parties agreed to settle the matter out of court with the nuns being among administrators who approached the court seeking ways to compel beneficiaries to return the money. The collapse of the schemes was blamed on some beneficiaries quitting the group after getting “paid”.

This created a vacuum exacerbated by the fact that there was no balance left behind which resulted in others failing to reap returns.

The Hwange Civil Court has over the weeks been inundated with several people including administrators of the collapsed schemes seeking legal assistance to recover hundreds of dollars which were lost. According to court sources in the mining town, residents especially administrators have been requesting letters of demand to force those that benefitted from the scheme to return the money.

“We have witnessed a number of people approaching the courts to obtain letters of demand which are the first port of call for legal action before a matter of this nature is heard before the courts. Most of those people have been the administrators of the schemes who want to use the letters to force members of the scheme who benefitted to pay back those amounts. This is so that the money can be returned to the other members of the schemes.”

Another source said about 80 letters of demand had been issued to some of the members who were being asked to return amounts ranging from US$280 to US$500. One letter of demand seen by Sunday News read in part: “Under section 22 of the Small Claims Courts chapter 7:12 we hereby demand the sum of US$260 within seven days which we paid you in anticipation of club continuity.

Regrettably the club has ceased. We are seized with refunds to other members who were yet to benefit. We are refunding to put members in the original position. We hope it will not be necessary to have to ligate for recovery.”

The plaintiff is said to have contributed US$20 in return for US$280. Police have warned people from joining the money spinning schemes.

“In light of the events surrounding collapsing pyramid schemes members of the public are warned against joining such schemes. As police we are kindly imploring our citizens to avoid taking chances by joining the money-spinning schemes as most of the principals have been profiteering at the expense of unsuspecting would-be beneficiaries,” said Matabeleland North provincial police spokesperson Inspector Glory Banda.