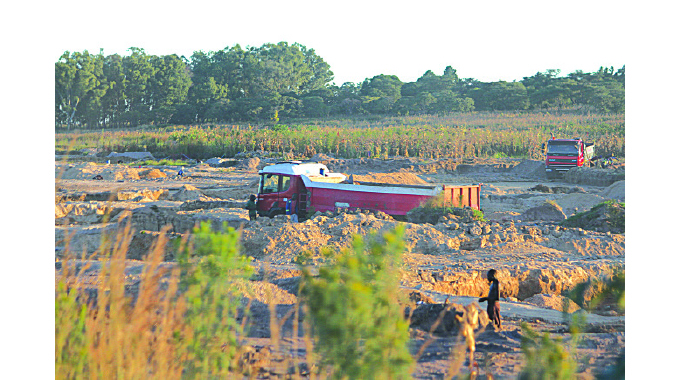 Sand poaching is now a menace in areas around Harare. This picture shows trucks being loaded with sand for sale to people building homes.

Extensive sand poaching in Harare and Chitungwiza has damaged at least 721 hectares of land, with reports that some top municipal officers are corruptly turning a blind eye as they protect the poachers who steal sand from public land.

Despite some raids by the understaffed Environmental Management Authority, the profits are huge since sand sells for US$6 to US$8 a cubic metre at the poaching points to those using their own transport, and far more if delivered. The only costs are the bribes since the sand is stolen.

A survey conducted by The Herald at sand poaching points in Harare and Chitungwiza revealed that poachers digging sand illegally enjoyed some protection from council officials, which made their illegal business viable. They only have to worry about the Environmental Management Authority (EMA) and the police.

Some top council officers are said to be operating their own illegal sand extraction businesses in the areas in question, using agents.

A check with EMA revealed that local authorities, especially, Harare, were not playing ball, hence dramatically hindering efforts by EMA and the police to curb sand poaching.

“As EMA, we are always on the ground apprehending illegal sand miners but our efforts are being hindered by lack of participation by land owners.

Sources in Harare accused the capital city’s top municipal officers of cashing in on sand poaching, hence protecting the poachers.

“Some top officers in the municipal police have vested interests in the sand mining business, hence they protect the territory at all costs. Their juniors also take bribes from the poachers and they end up protecting the poachers.

“If council is serious, it can simply deploy municipal officers at all known sand poaching points and effect arrests. Once they do that, sand poaching will be a thing of the past,” said the source.

“EMA are our partners and we work together in enforcement. Our municipal officers often do raids and make arrests,” he said.

Chitungwiza Municipality public relation officer Mr Lovemore Meya said according to council records, there was not even a single registered sand miner, hence all sand extraction in the town was illegal.

“Our records show that we do not have a single entity or individual licenced to extract sand in Chitungwiza. They are all operating illegally,” he said.

“No complaints have been received so far but if there are any leads, please assist,” he said.

While most of the affected land belongs to local authorities and the State, there seems to be little effort by these authorities to curb the illegal digging. Private landowners are more likely to take action but very little land near river beds and the like is privately owned.

Mr Mavondo attributed the illegal extraction of sand to the high demand for sand and clay by builders and developers, saying about 712 hectares of land has already been damaged in Harare. Damage means vegetation is stripped and deep wide pits are dug out, with these filling with stagnant water whenever it rains.

He appealed to local authorities to enforce their by-laws and ensure that the environment is protected against this degradation.

“Harare Metropolitan Province is experiencing unprecedented severe land degradation by illegal sand mining. The major areas affected by illegal sand mining are Eyecourt Farm where 120 hectares of land has been damaged, Eyestone Farm with 100 hectares already damaged and Retreat Farm where 300 hectares of land was damaged. At least 10ha of land has been damaged at Crest Breeders, 5ha in Stoneridge, 10ha at Dabuka Fairview while 40ha was damanged at Solomio Farm.” A combined 127 hectares was damaged in Renham, Ingwe Farm, Mabvuku-Tafara and Arington Farm.

“These farms are characterised by deep wide pits which are left open. During summer, these pits form pools of water endangering human life.”

“These are open pieces of land that lack constant monitoring because no one lives there. The illegal sand poachers take advantage of this and poach sand without fear.

Visits to some affected areas saw trucks ferrying sand from Eyecourt Farm to areas where there is construction.

One of the illegal sand miners said there is always a ready market for the sand. Our reporters were posing as potential buyers.

“We charge US$6 per cubic metre if you are using own transport. But if you are hiring, and depending on the destination, the charges increase. We do not accept local currency. It is not an easy business as we are often being raided by EMA and the police. But I can admit that we are making a killing from the business.”

At Epworth, in the area popularly known as KwaRueben where some illegal miners are extracting sand from a cemetery, heaps of sand could be seen in the said cemetery.

The cemetery is manned by municipal police staff who do not worry about the sand digging and heaps.

Sources said most poachers extract the sand during the day but some do prefer working overnight.

Some graves, according to sources, had been tampered with during illegal sand poaching.

By the time The Herald visited the area, there were no illegal miners in the vicinity with some residents nearby saying the miners had stopped their business to allow a burial process which was being conducted.

However, one of the miners said they are charging US$8 per cubic metre for those using own transport.

“Our supply is not limited to Epworth alone. We deliver to all the areas in Harare. As you said you want us to deliver your pit sand to Waterfalls, you will pay US$13 per cubic metre,” said a sand poacher at Epworth cemetery.