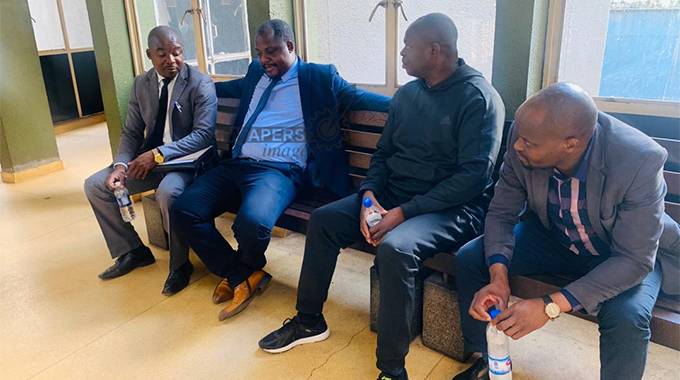 From right to left: Philton Makena and Smart Manda at the Harare Magistrates Court in the company of their lawyers

Tendai Rupapa Senior Court Reporter
TWO Reserve Bank of Zimbabwe (RBZ) economists have appeared in court for leaking a confidential document on the de-dollarisation of the economy to unauthorised persons, resulting in it going viral on social media.

Smart Manda (44) and Philton Makena (40) were charged with contravening Section 60 (1) of the RBZ Act Chapter 22:15 which requires “preservation of secrecy by bank employees.”

The two appeared before Harare magistrate Mrs Vongai Muchuchuti-Guwuriro, who freed them on $2 000 bail each with the State’s consent.

As part of their bail conditions, the pair was ordered to report once a week to police, not to interfere with witnesses and to reside at their given addresses until the matter is finalised.

They will be back in court on June 3.

Manda is being represented by Mr Arshiel Mugiya, while Mr Gift Chihuta is appearing on behalf of Makena.

Prosecutor Mr George Manokore said sometime in March, RBZ governor Dr John Mangudya assigned John Mafararikwa (director economic policy and research) to work on a document titled “De-dollarisation roadmap”, which would assist the Ministry of Finance and Economic Development in the de-dollarisation of the economy over a five-year period.

On April 15, Manda received the document from Mupunga via his central bank’s e-mail address that is linked to his Gmail account.

The court heard that on receipt, he converted it into a portable document format. It is alleged that Manda unlawfully sent the document via WhatsApp to Makena, who was not part of the team.

That same day, Makena forwarded the document to his cousin Bongani Zimuto via WhatsApp, who also forwarded it to his superior Wonder Madyambudzi, a business development executive at Zimnat Life Assurance and it went viral on various social media platforms.

It is alleged that the RBZ Information Technology department traced the movement of the document and screen shots of Manda’s e-mail will be produced as evidence.

The court heard that Manda’s cellphone is being held as an exhibit after it was sent to a cyber laboratory where examination revealed that he received the document and sent it to Makena.

Makena’s phone was also taken to the laboratory and the examination showed that the same document was forwarded to Zimuto whose phone was also screened, revealing he had received the document.

The cyber forensic report will be produced in court as an exhibit.

According to the State, Manda and Makena knew that it was the mandate of the RBZ governor and the Ministry of Finance to publish any document to members of the public.

They had no lawful excuse to publish RBZ corporate secrets without authorisation, the court heard.