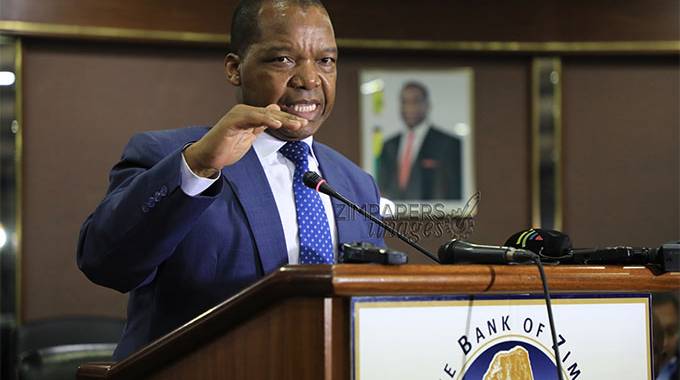 Importers that do not acquit bills of entry to prove proper use of foreign currency from the auction system shall be blacklisted, according to Reserve Bank of Zimbabwe (RBZ) Governor Dr John Mangudya.

The central bank chief told The Sunday Mail Business that it is a standing rule that beneficiaries should not be ‘favoured’ with additional forex if they fail to prove how they used earlier allocations, a practice which he said was tantamount to externalising the scarce resource.

About US$1,14 billion has been allotted to companies and small and medium enterprises since the auction began on June 23 last year.

Its success has managed to rein in inflation and tame exchange rate volatility. Despite initial scepticism, the foreign currency auction has grown to become the most widely used platform. Funds that are used during the weekly auctions are pooled from the 40 percent surrender requirement for exporters and the mandatory 20 percent liquidation from retailers.

Government has also agreed to sell its foreign currency to the central bank for on-selling via the auction system.

However, the country is making efforts to clear external loan arrears in order to be eligible for funding from multilateral lenders. The RBZ says while banks play a crucial role in preventing abuse of the auction system, the onus was on beneficiaries to prove how they would have used their allocations.

“If, for example, you import (something) and you do not acquit your documents (bills of entry) within 90 days, why should you come back to the auction? So, the acquittal of documents is a global practice.

“If you go to your bank (to apply) and you get the foreign currency, you are supposed to acquit your documents. It (indiscipline) is not widespread, but these are housekeeping issues,” Dr Mangudya said.

According to “the rules of the game”, he added, companies which fail to make acquittals will not be considered for future allocations.

“If there are rules of engagement, you need to follow the rules. It is like in the game of soccer, you cannot touch the ball and put it into the nets with your hands.”

The auction system has brought an organised way of obtaining forex for key imports, basic commodities and other essentials like fuel, drugs, raw materials, machinery and equipment. It has also helped through a market-led price discovery of the exchange rate.

Inflation, which peaked to 837 percent last year, has been stabilised as a result.

The bank’s FIU, who mandate is to instil market discipline, has been red-flagging, blocking and reversing or suspending suspicious transactions.