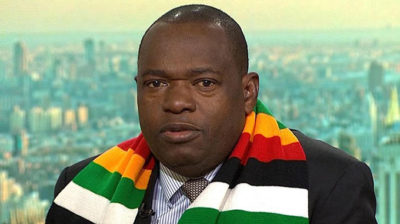 FOREIGN Affairs and International Trade minister Sibusiso Moyo’s recent humiliation in the United Kingdom at the hands of hecklers dampened Zimbabwe’s re-engagement thrust with the West, as attention was deflected to government’s apparent lethargy in addressing the intractable crisis gripping the southern African nation.

The development comes at a time the country is in the throes of a deepening economic crisis, characterised by an acute power shortage, food insecurity, rising commodity prices and widespread company closures. Inflation this month has since risen to 175,66% from 97,85% the previous month.
Moyo, who was catapulted into the limelight after announcing the millitary coup that toppled long-time ruler Robert Mugabe in 2017, was leading a delegation in London as part of President Emmerson Mnangagwa’s re-engagement drive with the UK, which has been critical of Harare’s appalling human rights records, and the worsening economic crisis.

Relations between London and Harare dramatically deteriorated in 2000 when Mugabe orchestrated illegal and violent land seizures that decimated the country’s once-vibrant agriculture sector.
Moyo’s delegation gave a glowing presentation at Chatham House, detailing the bold strides Mnangagwa’s administration has taken to correct Mugabe’s failures during his 37 years in power, much to the chagrin of an angry crowd which heckled and sprayed the Zimbabwean re-engagement team with bottled water.
A large section of ordinary Zimbabweans have, however, questioned the progress which Moyo and other government officials have been waxing lyrical about.

The rowdy crowd of protestors, which could be heard shouting “thieves” at the delegation, pounced on Moyo after he spoke about the “good progress” Mnangagwa’s administration has recorded in implementing political and economic reforms during his Chatham House presentation.

Following the embarrassing incident, and quite expectedly, focus shifted from Mnangagwa’s efforts to thaw frosty relations with the West — seen as key towards unlocking fresh lines of credit — to the President’s apparent failure to address the chronic economic crisis.

At home, Mnangagwa, who made a pledge to usher Zimbabwe into a “new dispensation”, has been facing fierce criticism for his perceived unwillingness to roll out sweeping political and economic reforms which are regarded as key towards setting the country on a recovery and growth trajectory.

Rhodes University politics lecturer Mike Mavura contends that Mnangagwa’s first priority should be pivoted around winning the trust of Zimbabweans, which seems to be waning since Mugabe’s ouster.
“The minister’s unpleasant encounter with the protestor is a sideshow in the bigger scheme of things. The Zimbabwean government should have an honest re-engagement with the Zimbabwean citizen first, but I do not see that happening with the current lot,” Mavura argued.

Under the re-engagement process, Britain, the European Union and the United States have all spelt out a framework of political and economic reforms Mnangagwa’s administration needs to embrace, to mend broken relations with the West and rescue the fragile economy from total collapse.

The International Monetary Fund (IMF), which is running a Staff-Monitored Programme (SMP) in Zimbabwe, has also spoken about the need to come up with a holistic solution to extinguish Harare’s gargantuan debt stock standing at US$23 billion.

On the political front, Mnangagwa — who narrowly won the disputed 2018 general election — has also been urged by Britain, the US and EU to bring to justice the security agents who shot and killed six civilians on August 1 last year. They were shot during protests which erupted when hundreds of people demonstrated in the aftermath of last year’s disputed polls.

Although Mnangagwa set up the Kgalema Motlanthe Commission of Inquiry to establish the circumstances that led to the shootings, victims are yet to receive compensation while his administration has not committed to bringing the perpetrators to book.

In January, state agents also descended heavily on demonstrators who were protesting against a 150% fuel increase by government. Seventeen people were killed while scores were injured during the crackdown which occurred during an internet blackout, drawing the condemnation of the international community.

Coupled to that, analysts contend that Mnangagwa’s re-engagement rhetoric rings hollow, in the face of an imploding economy at home and a worsening human rights record.

“The protest was a genuine remonstration against the face of the coup regime who was gallivanting abroad, at times saying outright lies about no deaths or rights abuses in Zimbabwe. It is clear that (Itai) Dzamara has not been accounted for, more than a dozen activists have been charged with treason or subversion; people were killed on August 1 2018, and the charade of a commission set was just tomfoolery,” Saungweme said.

“In January, people were killed, maimed and raped after protests, and civic space, in general, has shrunk. The protesters did right to show Moyo and his handlers that re-engagement is premised on real change in terms of respect for human rights at home, not jet-setting and lies.”

“It (Moyo’s humiliation) is an incident in the bigger scheme of things. It shows the desire by the United Kingdom (UK) to rekindle the re-engagement drive which was almost extinguished by the August 1 killings and the January shootings.

“The import of what happened is that it brings into question the health or lack thereof of the re-engagement exercise,” Masunungure posited.

The post Re-engagement drive: Govt should prioritise its citizens appeared first on The Zimbabwe Independent.