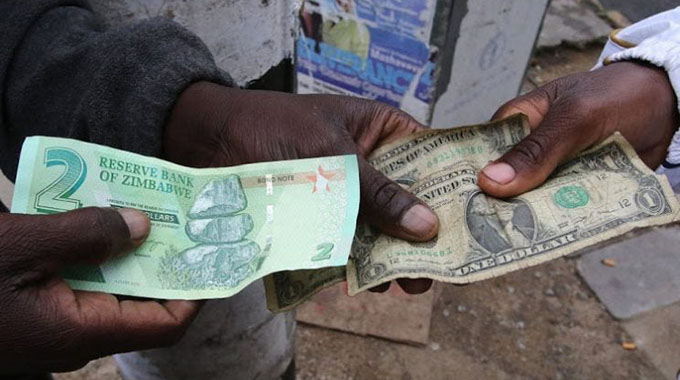 Since late last year, the black market foreign currency exchange rate has been stable and so were prices of goods and services, bringing hope to the general population that, now one can at least budget for the future.

Much to our chagrin, last week there was a sudden surge in the US dollar black market exchange rate and again, the public started panicking. Everyone was taken aback.

Suffice to say, the parallel market exchange rate had been steady, failing to breach the US$1:22 mark for the last four months — including the festive season — and, we were shocked when all of a sudden, there was an unprecedented jump within two days.

The rate had remained at US$1:$17 on the interbank market, as well.

The surge in black market foreign currency exchange rates recorded last week from US$1:$22 to US$1:$25 has been traced to a Chinese company that shipped millions of dollars to the black market.

The firm is said to have gone on the black market to offload millions of local currency paid to it by the Government for the construction of Gwayi-Shangani Dam.

That is how bad it went.

We are told RBZ has now activated its surveillance systems to identify more culprits, but history, they say, is a great teacher.

Given the legal instruments heaped on RBZ by the Government to teeth itself last year, we wonder when the central bank is going to really act and send the correct message. When?

The Government gave RBZ many legal instruments, including a law that has a mandatory 10-year-jail term for dealing in forex.

The RBZ, police and the courts must ensure the instruments are put to use to act as deterrents.

Despite the prevalence of foreign currency dealers on the black market, we have not seen a single person jailed 10 years.

The question is why does RBZ seem to develop jelly feet when confronted with a big catch? We will be forgiven to blame RBZ for ineptness or failing to carry its mandate to regulate the financial sector.

We see the scores, if not hundreds, of foreign currency dealers every day, holding bundles of cash — foreign and local — on roadsides.

No one needs a prophet or a soothsayer to sniff out foreign currency dealers. They are trading in the open and in broad daylight.

The black market exchange rate, particularly on the EcoCash platform is the most visible single channel and all phone lines used are registered under names, real names and yet the authorities are not acting.

Activities on the black market fly in the face of RBZ Governor Dr John Mangudya who insists that the RBZ remains focused on its mandate to ensure market stability.

We believe stability can be achieved if the central bank uses instruments that are at its disposal.

In September last year, the RBZ froze bank accounts held by 10 companies on suspicion they were engaging in money laundering and fuelling the foreign currency parallel market.

We were excited that finally the cat had been set among the pigeons, but what followed bred more culprits instead of instilling fear.

The bank accounts were unfrozen after the FIU allegedly failed to get evidence linking the firms to illegal foreign currency dealings that saw the local unit crashing, triggering price hikes.

Suffice to say we are not, in any way, advocating the punishment of innocent people and companies but we are shocked that no one has been punished, at least in the public domain.

We urge the RBZ to be tougher in dealing with alleged currency manipulators to foster currency stability.

The central bank must prove that it can use powers bestowed upon it by the Government to bring sanity through deterrent action.

The RBZ must understand that current pricing regimes are pegged to the US dollar black market rate, equivalent.

The more the black market is let loose, the worse things will be for all and sundry.

The RBZ needs not be reminded that the black market is the single largest problematic economic dynamic affecting the ordinary person in accessing goods and services.

It is prudent therefore to control the black market using the legal instruments available.